Federal Housing Finance Agency director Mel Watt on Tuesday kicked off a new push to get eligible homeowners into the Home Affordable Refinance Program, or HARP, beginning with a town hall meeting in Chicago. The FHFA estimates there are more than 650,000 HARP-eligible borrowers nationwide who would benefit from the program. 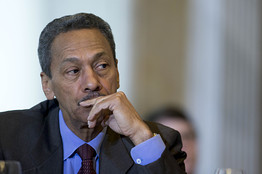 Mr. Watt’s campaign begins a couple weeks after Treasury Secretary Jack Lew announced that the Making Home Affordable program, which includes the Home Affordable Modification Program, or HAMP, would be extended for another year through 2016.

HARP lets borrowers refinance their mortgages, even if they owe more than their home is worth. HAMP seeks to reduce monthly payments by extending loan terms, lowering interest rates and reducing principal.

Given that both programs have been kicking around for more than five years and that the home-price recovery is well-advanced, it’s worth asking what the programs can still accomplish.

Have the programs worked?

In short, HAMP has struggled, while HARP has performed admirably after early stumbles.

HARP also stumbled out of the gate, but after a revamp in 2011, some have described it as the government’s most successful program to address the foreclosure crisis. In the town hall on Tuesday, Mr. Watt said some eligible borrowers might not be applying because they suspect the program is a scam or that it will be too burdensome to go through the program.

Is there really much left for the programs to do?

Mr. Watt and the Obama administration clearly think so–or at least that there’s no harm in trying. As it stands, HARP applications will continue through the end of 2015 and HAMP will keep going through 2016. “When you work hard, act responsibly, and play by the rules, you should not have to live in fear that you are going to lose your home,” said Mr. Lew at an event marking the five-year anniversary of the program.

That said, the pace of refinances and modifications has dropped considerably.

Take HARP. As of the end of the first quarter, 3.1 million HARP refinances had been completed. But the number of applicants has dropped as mortgage rates have risen, diminishing the incentive to refinance. In the first quarter, lenders completed 77,000 refinances. That compares to 115,000 in the fourth quarter of last year and a whopping 294,000 in last year’s first quarter.

Why aren’t the programs doing more?

It’s not clear that there’s much more the FHFA or administration can do.

When Mr. Watt took office this year, some hoped he would expand HARP’s eligibility parameters. Instead, he put the kibosh on that idea in a speech at the Brookings Institution saying that would help only a small number of borrowers.

It’s fair to say that any push to get more borrowers into HARP would have been more effective toward the beginning of last year, when mortgage rates were lower and more homes were underwater or close to it. That said, the FHFA still believes there were nearly 676,000 eligible loans at the end of 2013 that would benefit by going through the program. To that end, the agency has put together a handy map showing where the eligible loans are.

On the other hand, HAMP’s shortcomings are coming at least in part from slow or ineffective processes at lenders or servicers. The program had stringent application requirements to prevent fraud, and though officials have tried to loosen some of them, borrowers still tell stories of improperly denied applications and lost paperwork.