Despite a glimmer of hope in recent national elections, Ukraine is still the battleground for one of the tensest standoffs between Russia and the West since the end of the Cold War.

President Barack Obama plans to press European officials this week to keep up the financial pressure on Moscow over Russia’s destabilizing role in Ukraine.

But what is the country’s new government thinking?

Ukraine Ambassador Olexander Motsyk says in an interview that his country could use more military support from the U.S. and a bigger bailout package may be needed to help fix the broken economy. He says that despite toned-down rhetoric from Kremlin officials, Russia is still fomenting political turmoil by funding “terrorist” separatist operations in eastern parts of the country, actions U.S. officials have previously said would prompt a ratcheting-up of sanctions against Moscow. And Mr. Motsyk says Kiev may take Gazprom to court if continues to use a gas price dispute as political blackmail.

Below is an edited version of the interview.

WSJ: Some analysts take Moscow’s latest rhetoric as a retreating in the face of Western sanctions. What’s your take? 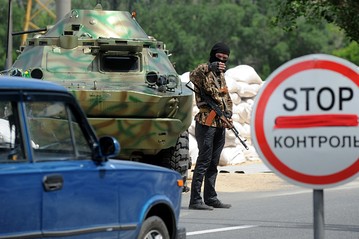 A pro-Russian militant stands guard at a check-point in the village of Peski, not far from the eastern Ukrainian city of Donetsk.
Agence France-Presse/Getty Images

Motsyk: Ahead of Ukraine’s presidential election, Putin pledged to withdraw Russian troops from our border. Indeed, in recent days, we saw some retreat of Russia’s forces from the areas adjacent to our territory, but the bulk of them are still there.

Moreover, Moscow increases exporting terrorism into our country. On a daily basis, armed militants, financed and equipped by Russia, are infiltrating into Ukraine through the Ukrainian-Russian border. Russian nationals are highly active in eastern regions of Ukraine, causing destabilization on the ground. There is clear evidence that separatists are trained at the special training centers on the territory of Russia.

Recently, Ukrainian armed forces have successfully fought off an attempt by these thugs to seize the airport in Donetsk. Dozens of terrorists were eliminated. Most of them were later identified as Russian nationals, primarily from Caucasus. According to the Prosecutor Office of Ukraine, as of today, 122 Ukrainians were killed and more than 200 wounded due to the criminal activities of the Russian citizens in Ukraine…

As the security situation in Ukraine is concerned, we have not seen any practical steps on the part of Moscow, which would indicate its intention to de-escalate. Except for some empty rhetoric and showy moves aimed to mislead the international community and avoid further sanctions, Russia’s approach has been the same as it was throughout this conflict.

WSJ: Were the elections representative of the entire country?

Motsyk: It is obvious that the elections, wherein more than 60% of voters of Ukraine took part, were successful, and Ukrainians clearly made a choice for a European future. The vast majority of Ukrainian citizens from all regions of the country, including occupied Crimea, participated in the vote at more than 90% of the country’s polling stations, thereby confirming full representativeness and legitimacy of their will. More than 72,000 Ukrainians living abroad voted at 114 polling stations in our diplomatic missions.

It is true that terrorists with support of Russia have stripped through intimidation and terror many voters in Donetsk and Luhansk region of the opportunity to vote. The office of the Prosecutor General opened 125 criminal cases of obstructing the voting process, mostly in Donetsk and Luhansk. Nevertheless, despite all challenges, even in the East people managed to cast their votes.

WSJ: Are the current sanctions sufficient, or should the West ratchet up the pressure with additional efforts?

Motsyk: Russia…continues to violate its obligations and principles of international law by pursuing the tactics of further covert escalation and aggravation of tensions….It is essential that an option of sectoral sanctions against Russian economy is kept open. This risk has already caused the Kremlin to soften its tone and to take measured steps in favor of de-escalation, like withdrawal of a number of troops from the Ukrainian border. However, the aggression is still ongoing, changing its form, but not its substance. Since the possibility of further sanctions was tied to the Russian intervention, its leadership has chosen to pursue a course of export of terrorism instead.

The fact remains that all actions taken so far and all sanctions currently in place have not protected the security and territorial integrity of Ukraine, despite assurances that we had received when we gave up our world third-largest nuclear arsenal twenty years ago. The international community must continue to act until our territorial integrity is restored, namely, until Crimea is returned to Ukraine.

WSJ: What’s the path to avoiding a natural gas shut off? Do you expect a Russian gas shutoff in early June to Ukraine or to Europe?

Motsyk: We are ready to pay our gas bills, but we want to play the fair game and refuse to be blackmailed by Russia over the gas issue. To solve the mentioned problem Ukraine has initiated trilateral gas talks including the EU and Russia and as of today four rounds of these talks have been conducted. Our proposals are simple and clear: to set the new market price for Ukraine or the temporary one till the gas dispute is settled through the negotiations or the international arbitrage; [and] to cancel Gazprom’s decision on introducing the gas prepayment system for Ukraine.

Ukraine will do its utmost to reach an agreement. However, if the Russian Federation continues to demonstrate its unwillingness to solve this issue Ukraine will be forced to file a lawsuit to the Arbitration Institute of the Stockholm Chamber of Commerce.

Motsyk: To stabilize the financial and economic situation in Ukraine as soon as possible. And of course, to combat corruption at all levels.

Top priorities also include: signing the economic part of the Association Agreement with the EU and resolving the gas conflict with Russia.

Ukraine has never before been so threatened from outside and simultaneously had such incredible chances and prospects for the future. Ukraine’s strategic partnership and economic cooperation with the United States, along with integration to the European Union, is a significant part of solution to save and strengthen our independence, sovereignty and security.

Motsyk: Of course, the amount of $27 billion is only the minimum rescue package for the Ukrainian economy, taking into account the current situation. We appreciate financial assistance that was already provided by our partners, including the U.S., the EU and such international institutions as the IMF, World Bank and EBRD. And we count on additional support.

WSJ: What types of discussions are underway on U.S. military assistance/aid?

Motsyk: The United States actively participated in a number of joint military exercises including Rapid Trident, provided training to Ukrainian servicemen and officers. These days we continue to count on the U.S. government assisting my country with various types of non-lethal support. Ukrainian Armed Forces need a lot of military-technical support and assistance. We need to strengthen our overall defense capacity, including border control and protection, modernize its military equipment, and improve logistic support. Ukraine will continue the anti-terrorist operation against separatists.

WSJ: What mandate have voters given the new government?

Motsyk: Almost 90% of voters from all regions of the country, including the occupied Crimea, expressed their firm support for the united and independent Ukraine, European integration and democratic developments. The Revolution of Dignity that preceded the elections clearly showed people’s desire to have a responsible government, without corruption, that hears the concerns of all people across the country, ensures protection of fundamental rights and freedoms, and development of a free market economy. This list also includes ensuring safety and territorial integrity of Ukraine, including the return of illegally annexed Crimea, and carrying out constitutional reform that provides for decentralization of power.