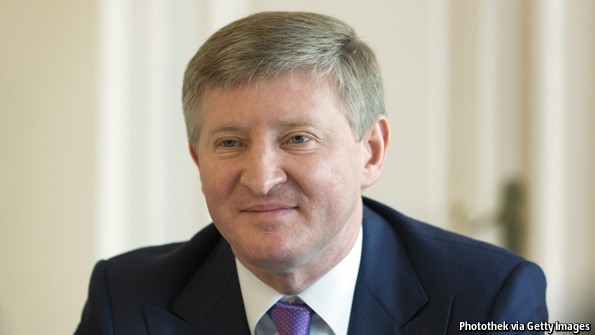 FOR weeks he played all sides and avoided throwing his clout in any one direction in eastern Ukraine’s simmering conflict. Now Rinat Akhmetov (pictured), the country richest man, who has long run the Donbass region like his own feudal estate, has made his choice. On May 19th he released a video in which he criticised the separatist leaders of the self-proclaimed “Donetsk People’s Republic”. They have only sown chaos, according to Mr Akhmetov. “It is a fight against the citizens of our region. It is a fight against Donbass,” he said.

Mr Akhmetov appeared shaken, his voice was full of emotion. His address to the citizens of the east was both an earnest plea and an expression of fear—Mr Akhmetov is accustomed to orchestrating events, not having to catch up to them. He called for demonstrations against the separatists at the many factories and industrial plants under his control. On May 20th all drivers at Donestk taxi company, which is part of Mr Akhmetov’s business empire, received a text message requiring “mandatory attendance” in an anti-separatist action referred to as “Donetsk against war”.

Just before midday in Enakievo, the birthplace of the former president, Victor Yanukovych, whose rise over the years tracked Mr Akhmetov’s own, workers at the metallurgy plant owned by Mr Akhmetov began to file toward the factory’s main square. They were told to come by a company-wide email. Alexander Podkorytov, the factory’s general director, was studiously apolitical in addressing his charges. He did not mention the Donetsk People’s Republic or even the word “separatism”, instead speaking only of the economic ramifications of continued instability, of reduced production and of lost jobs. But the subtext was obvious: Mr Akhmetov had moved against the separatist militias, and those working for him, as much foot-soldiers as employees, were expected to follow along. After his speech Mr Podkorytov acknowledged the “social aspect” of his pep talk—the steel plant, he said, “does not exist in the cosmos, it can only function when the surrounding environment is in order.”

It was unclear how that message was received. As the workers filed back toward the plant, belching molten steel and black smoke, one estimated that opinion at the ironworks is evenly split between those who support the separatists and those opposed. Another worker claimed that around 80% are on the side of the pro-Russian forces. Nearly all seemed confused and unsure. They wanted stability, for the town and their own jobs, but how to achieve it? Since last autumn, when the Maidan protests broke out in Kiev, so many would-be masters—whether Donbass politicians or industrial bosses—have indoctrinated them with contradictory truths about their country’s historical trajectory that the arguments were turning to mush.

Sergei, an engineer, was sceptical of the aims of the separatists. “People don’t understand the consequences of all this,” he said. Here, he said, pointing to the plant, they give us salaries. “But do they?” he said of the pro-Russian leaders. Near the furnaces of the steel foundries, glowing bright orange with liquid metal, a worker named Maxim disagreed. The new authorities in Kiev are “not a government, but some kind of nonsense”, he said, and then repeated a frequent complaint in eastern Ukraine, that the industrial east pays into the state budget so regions in the west of the country can enjoy welfare payments. He said Mr Akhmetov was making a mistake breaking with the separatists, and then made an implicit threat: “There’s just one of him, and a lot of us.”

For now, Mr Akhmetov’s ability to will his preferred state of affairs into being is indeed limited: just down the road from his factory in Enakievo, the regional administration building still flies the flag of the Donetsk People’s Republic, not of Ukraine.

At Shaktar stadium, the home of Mr Akhmetov’s football team, what was promised to be a large rally turned out to be a rather anemic gathering of several hundred people, most of whom were employees of the football club or teenagers enrolled at its affiliated youth academy. Few knew why they were there. One explanation was offered by a woman named Larisa, who described herself as the financial director of the club. She had a “heartfelt impulse” to come, she said; as for Mr Akhmetov, she added, “we believe and trust in him in everything”.

The separatist leaders in Donetsk reacted with great anger to Mr Akhmetov’s criticism. They have more power in relation to Mr Akhmetov than he may like, but less than they boastfully pretend. Denis Pushilin, the public face of the Donetsk People’s Republic, said the separatists would “nationalise” Mr Akhmetov’s holdings. Yet however many gunmen they can rustle up to man highway barricades, eastern Ukraine’s various pro-Russian militias do not have the force to seize Mr Akhmetov’s factories and property. What’s more, Mr Akhmetov’s new position appears to have deepened developing cleavages within the separatist leadership. Some may be more willing to go home than others.

If anything is clear, it is that Mr Akhmetov has at least in part been overtaken on his home turf by the men with guns. The various rivalries between armed groups in the east have taken on their own momentum. In particular, the military standoff in Sloviansk, led by a Russian commander, Igor Girkin, also known by his nom de guerre, Igor Strelkov, has settled into a grinding stalemate that will be hard to undo.

Earlier this week, Oleg Kashin, a prominent Russian journalist, wrote that “Strelkov will not allow the separatists of Donetsk to go home, even if Akhmetov gives Pushilin the relevant order”. The contest in eastern Ukraine, Mr Kashin wrote, “has long ago gone beyond the bounds of…domestic Ukrainian intrigues with Akhmetov’s involvement”. A local political scientist in Donestk, Vladimir Kipen, put it simply: the latest act in eastern Ukraine’s ongoing drama reveals that, in the end, Mr Akhmetov “turned out to be a good businessman, but a bad politician—and an even worse citizen”.