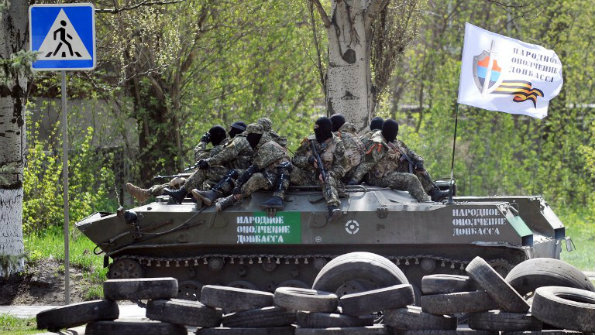 HOPES that an accord struck on April 17th in Geneva between Ukraine, Russia, America and the European Union would lead to a swift resolution of the Ukrainian crisis have been swiftly dashed. Denis Pushilin, the chairman of the self-proclaimed People’s Republic of Donetsk, speaking in the region’s occupied administration building, said that Sergei Lavrov, Russia’s foreign minister “did not sign for us”.

As part of the agreement, illegal armed groups are to be disarmed and illegally occupied buildings and other places vacated. An amnesty is to be extended to protestors and there will be a new constitutional process that includes “all of Ukraine’s regions and political constituencies”.

Mr Pushilin rejected the deal made on their behalf by Russia, saying that the buildings now under the control of his Donetsk Republic would only be vacated after all the buildings occupied in Kiev had been vacated. By this he meant that the new Ukrainian government was illegal and hence it had to disband first, before orders would go out for the same to happen in the Donetsk and the rest of the Donbas region, where anti-government rebels have seized buildings and built checkpoints. 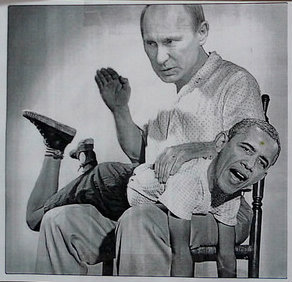 The Donetsk administration building is heavily fortified by several lines of tyres and barbed-wire barricades. Inside, pro-Russia slogans and cartoons are pinned to the walls (see right). Outside, loudspeakers play patriotic songs and broadcast messages such as “we will stay to the end”. Mr Pushilin denounced the new government in Kiev, repeating the same line that he and the Russian media have used since February, to the effect that it is “fascist” and made up of “criminals”.

Guards and others defending the building seemed somewhat bemused and confused by the agreement. Some repeated that they were not going anywhere while some said they would just do what they were told to do.

The defiant line from the rebel headquarters mirrors the language heard at a pro-Ukrainian rally in the city on April 17th. Up to 2,000 people, protected by hundreds of disciplined riot police, gathered to listen to rousing speeches. As a giant Ukraine flag was passed over their heads people chanted “Glory to Ukraine!” and “We will not give up Donbas!” Oleh Lyashko, the leader of a small party and a presidential candidate, said that Ukraine faced “the choice of shame or war—and I am for war.”

Olena Yemchenko, an artist, said she was happy that so many had turned up because rumours that the rally would be attacked by separatists had been coursing through social media all day and many of her friends had been too frightened to come. Asked if she was scared of war she said: “Yes, of course. But if it starts, I will stop being afraid and start to do something.”

On April 16th the Ukrainian authorities began what they called an anti-terrorist operation. It ended in humiliation. Two columns of armoured vehicles were stopped by local civilians backed by rebel militiamen. Faced with the choice of having to kill civilians and then probably being killed themselves, the soldiers capitulated. One column was allowed to leave but the soldiers of the other lost their vehicles and arms, and some 40 soldiers were put on buses and sent back the way they had come.

Spring has come to the Donbas. Away from checkpoints and occupied buildings life is continuing as normal. In Donetsk town hall, masked members of a Russian extreme-nationalist group control the entrance and play chess in the lobby, while everyday work continues as if they were not there.

The Ukrainian flag continues to fly from the roof while the Russian and rebel Donetsk ones fly at the regional administration building. Geneva seems a long way away. From Yugoslavia to Syria, the Swiss city has been the place where so much hope has been invested in peace conferences, and where all too often whatever was agreed was soon forgotten. For now, add Ukraine to the list.