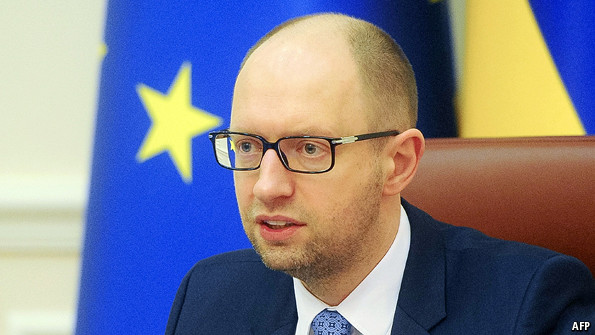 Last weekend the Ukrainian newspaper Dzerkalo Tyzhnia published a large survey of more than 3,000 people in eight southern and eastern regions. Some of the results should comfort the country’s leaders: only 15% of respondents want to unite with Russia. Even in Donetsk and Luhansk (the easternmost and most thoroughly Russian-speaking regions), the figure is less than a third. The poll debunks Russia’s narrative of a desperate Russophone community in revolt against a nationalistic government in Kiev: some 77% oppose the armed separatists who have occupied public buildings in the region.

But while many southern and eastern Ukrainians may not support the separatists, neither do they support the government. Half of respondents consider the current, internationally recognised authorities to be illegitimate. In Donetsk and Luhansk, that figure rises to 70%.

With Russian media referring to it as “coup-appointed”, Ukraine’s government has failed to convince many of its citizens of its right to be in office. Although its constitutional foundations are not rock-solid, every effort was made to embed them in strong parliamentary foundations. On February 21st, as part of a deal with then president Viktor Yanukovych, Ukraine’s parliament voted to reinstate amendments to the constitution, which had been made in 2004 and cancelled in 2010. These shifted the power to nominate most of the cabinet from the president to the parliament. Mr Yanukovych did not sign this resolution, and fled.

There were no constitutional provisions for this: Mr Yanukovych was neither dead nor sick, and he had not been impeached. It was in these unprecedented circumstances that Ukraine’s parliament passed, on February 22nd, resolution 757-VII: “On self-withdrawal of the President of Ukraine from performing his constitutional duties and setting early elections of the President of Ukraine.” Of the parliament’s 449 members, 328 voted in favour and none against. Subsequent resolutions, all passed with huge majorities, established that the speaker of parliament would become acting president, and Oleksandr Turchynov was voted into that role.

Mr Turchynov promptly signed the return to the 2004 constitution, meaning his power was limited to appointing only the ministers of defence and foreign affairs who are also referred to as “acting”. The rest of the cabinet was chosen by parliament, and since parliament was elected in 2012 for a five-year term, it could stay in office until 2017. Although prime minister Arseniy Yatsenyuk has said he expects his “kamikaze” government to be short-lived, it is not, technically, “interim”.

The only election currently scheduled (for May 25th) is the presidential one. Early parliamentary polls may or may not happen soon after that. Many Ukrainian MPs have said they should, but others have reportedly asked for guarantees that there will not be early polls, as a condition for supporting government-proposed legislation. Either way, Mr Yatsenyuk will probably stay on as prime minister, due to his popularity with Western donors.

In the new government’s early days, parliament approved virtually all proposed legislation by wide margins. No more. Visiting Kiev earlier this week, Joe Biden, the American vice-president, praised Ukraine for taking steps to combat corruption, but in reality the measures have been severely diluted. Horse-trading, with politicians putting their business interests before their convictions, has returned.

Even members of Vitali Klitschko’s UDAR party, which initially vowed full support for the coalition led by Yulia Tymoshenko’s Batkivshchyna (Fatherland) bloc, have been voting against the government. The nationalist Svoboda party remains loyal, but its origins as the “Social-National party of Ukraine” make it a liability to a government the Russian media (widely watched in eastern Ukraine) portrays as fascist.

The Ukrainian government’s chances of boosting its popularity by swiftly passing popular legislation are low. In the face of a belligerent Russia, the country is scarcely any better equipped politically than it is militarily.