Ukraine’s High-Wire Act: One Misstep Could Plunge It Into the Abyss – Real Time Economics 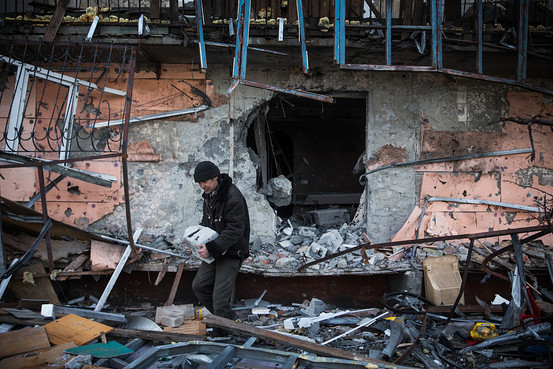 Ukraine’s bailout is a high-wire balancing act: One misstep and the economy could fall into the abyss.

Just hours after the International Monetary Fund approved an expanded, $17.5 billion emergency-financing package for the country, outside economists were once again questioning the reality of the fund’s assumptions.

There are a myriad of what the IMF calls “exceptionally high risks” to the program.

But three sets of assumptions stand out: about the conflict with Russian-backed separatists, economic growth and a planned debt restructuring.

“The odds of this program surviving intact for four years, or even through the end of 2015, are not much higher than for the original 2014 program,” said Robert Kahn, a senior fellow at the Council on Foreign Relations and former IMF economist in a blog post Thursday.

Since the start, the Ukraine bailout has drawn comparisons to the Greek program. Five years later–after countless revisions, expanded financing and the largest debt restructuring in history–Greece is still fighting with creditors and struggling to return to health.

As in the Greek program, the IMF was at first adamant that no debt relief would be needed. Then, after repeated downward revisions of the growth outlook, the IMF acknowledged what analysts, economists and reporters had predicted all along: A debt restructuring was vital.

In Ukraine’s case, one of the biggest risks is that the bailout is based on a fragile cease-fire holding between Kiev and the militants. A re-escalation would scupper the ability of the government to meet its obligations to the fund.  Underscoring the frailty of the program, U.S. officials said just hours before the fund approved the bailout that separatists had already violated the accord.

“The greatest risk is the Russian military aggression in eastern Ukraine,” said Anders Åslund, a senior fellow at the Peterson Institute for International Economics and former adviser to Ukraine’s government. “Nobody outside the Kremlin knows if, when, or where Russian troops will intensify their attacks again.”

Analysts said that the fund’s approval of the program despite the “exceptional risks” shows the larger international aid deal is a political decision by the West to shore up a strategic Eastern European country against Russian aggression. The Kremlin ordered an invasion of Crimea and backed separatist fighters in the east after Moscow’s longtime ally in Kiev was ousted last year and a fledgling pro-West government committed to re-engaging with Europe on a trade pact.

Economists also question the growth outlook, which is based on a “nonintensification” of the program. The IMF has had to revise down its growth forecast for the country again. It now assumes a 5.5% contraction this year and a rebound to growth next year at 2%.

“Private forecasters predict a deeper recession, as much as a 10 percent decline this year and a further fall next year,” Mr. Kahn said.

One reason why the IMF’s forecasts may be rosier than many private expectations is that the fund says there’s “spotty” data from the regions of conflict. That means most of the IMF’s growth forecasts are based largely on nonconflict areas. The fund’s program also doesn’t include the annexed region of Crimea.

IMF staff, whose reputations are on the front lines for these bailouts, include careful acknowledgements of such risks in the 173 pages of program documentation.

The third major risk is the $15 billion in debt relief that the IMF is assuming will come from creditors—even though Kiev hasn’t yet started negotiations.

“Creditors may balk at the terms being offered in the debt operation and holdouts may try to free ride,” the IMF said. “The negotiations may be protracted, particularly as some creditors have large positions in specific bond issues.”

The process could turn “disorderly,” a fund euphemism for default, fund officials wrote.

The IMF said debt negotiations must be completed by June with a high creditor participation rate to trigger the next tranche of emergency cash.

And yet, “the greatest domestic risk,” Mr. Åslund said, “remains corruption.” If the government is unable to carry out radical plans to overhaul its economy, institutions and bureaucracies meant to rid the country of decades of corruption, the bailout will have been fruitless.

In a worst-case scenario–such as if fighting intensifies, the debt restructuring negotiations fail and the contraction is much longer than expected–the IMF said the ratio of debt to GDP could more than double by 2017. That would push the economy into the abyss.

“Ukraine has a new chance to reform and save itself, but the situation remains precarious,” Mr. Åslund said.