Ukraine’s turmoil: Chaos out of order 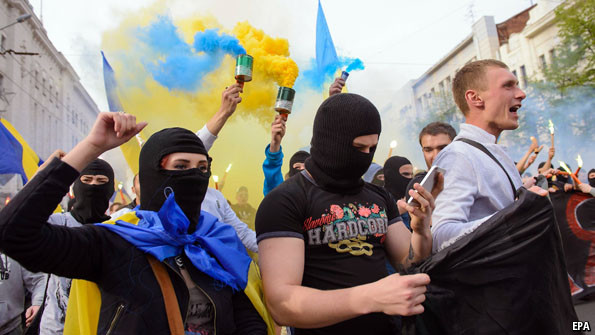 IT IS death by a thousand cuts. Each day sees more bad news for Ukraine’s government in the east. This week buildings were seized in Konstantinovka, armed men backed by 2,000 cheering anti-government protesters took control of government offices in Luhansk, and the city council building was taken in Gorlovka. In most cases, local police and security services did nothing. When anti-government protesters took the television headquarters in Donetsk they met no resistance, switched off Ukrainian television and retuned to Russian channels instead. The police also did little when pro- and anti-government groups fought in the city streets. In Konstantinovka, when the police building was taken, policemen were reportedly told not to come to work until the takeover was complete.

Oleksandr Turchynov, Ukraine’s acting president, rails against police treachery but admits the security forces are “helpless” in the east now. It is not hard to fathom why. The police are paid little, unlike their peers in Russia. Many were sent to Kiev during anti-government protests last winter and told they were fighting “fascists”. Now these people are nominally their masters. The Russian media, widely watched and read in the east, plays up the activities of small far-right groups in Kiev and elsewhere. Many policemen openly sympathise with the anti-Kiev protesters.

But there are other reasons why the police refuse to fight. Assailed by angry activists and protesters, they are understandably reluctant to shoot to kill. Two days after the burial of Voldymyr Rybak, a local councillor who remonstrated with rebels in Gorlovka and was then murdered, Russian journalists broadcast footage of their interrogation in Sloviansk of three bloodied, beaten and blindfolded men from the Ukrainian security services.

These events have sent a chilling message. For many, the cause of defending Ukraine, and especially an unpopular Kiev government, is not worth dying for. Women are telling their menfolk to avoid risky heroics. Now, says Hanna Shelest, an analyst who has family in Konstantinovka, fear is spreading. In Sloviansk some 40 pro-Ukrainian activists, journalists as well as a group of European military observers operating under a mandate from the Organisation for Security and Co-operation in Europe, are all still in detention.

Now attention is turning to Kharkiv, Ukraine’s second city. On April 28th Gennady Kernes, its controversial mayor, was shot in the back and left fighting for his life. He was against the Kiev protests that brought down President Viktor Yanukovych in February, but has since come out for Ukrainian unity. His removal leaves the city, of which he was undisputed master, decapitated; until his shooting, attempts to occupy buildings were rebuffed.

“Unless the police start to act against separatists,” says Natalka Zubar, a veteran Kharkiv civil activist, “people will begin to do it themselves.” Kharkiv is different from the Donbas, she says; far more people are willing to fight for Ukraine. Asked if ordinary people are arming, she says “Yes, of course—that is not a secret.”

The West has responded to these events with some tough language (John Kerry, the American secretary of state, this week called on Russia “to leave Ukraine in peace”), but rather weaker measures. The hope seems to be that careful calibration will lead to de-escalation. Hence the gradually intensifying “smart” sanctions, which are designed to hurt Mr Putin and his closest allies but to minimise the pain for ordinary Russians.

This week America imposed extra sanctions against seven individuals, including a deputy prime minister, as well as three smallish banks and a string of companies linked to Gennady Timchenko and other oligarchs subject to sanctions. The European Union followed with travel bans and asset freezes on 15 politicians and military leaders, including General Valery Gerasimov, chief of the Russian army. The most eye-catching was Igor Sechin, the chairman of Rosneft, the state-controlled oil giant and a longtime Putin confidant. This will complicate Rosneft’s dealings with Western oil majors, though the company itself has not been singled out. BP is the most exposed, with a 20% stake in the Russian group (which accounts for a third of its output). Exxon Mobil, Italy’s ENI and others have Arctic joint ventures with Rosneft.

Western leaders have held back from sanctioning entire industries such as finance or energy, arguing that they need to keep some powder dry. Yet one senator called the latest sanctions just “a slap on the wrist”. The Moscow stockmarket rose in relief at weaker measures than expected. The Americans seem to have planned something bolder but got cold feet. Officials hinted at the inclusion of a big bank and the head of Gazprom, but neither was on the list.

Anders Aslund, of the Peterson Institute for International Economics, thinks America is wrong to go for a gradual ratcheting-up of sanctions. It worked in Iran. “But that was about reversing a process [nuclear proliferation]. This is about stopping an invasion,” says Mr Aslund. “What’s required is not a gradual tightening of the screws but shock-and-awe deterrence,” such as isolating VEB, Gazprombank and other large state-owned lenders.

The EU is divided, with some countries pushing for tougher sanctions, others against, and a few willing to back them only if compensated for any losses. Germany is ambivalent (few are as blatant as Gerhard Schröder, the former chancellor, who at his 70th birthday party this week was seen hugging Mr Putin). With more to lose than America—EU trade with Russia is 14 times bigger—European companies have lobbied against sanctions. Numerous corporate bosses, including those from Siemens and Shell, have beaten a path to Mr Putin’s door since the crisis began. Joe Kaeser of Siemens reminded his host that the firm’s 161-year presence in Russia has “survived many highs and lows”. BP’s boss, Bob Dudley says the firm is “rock solid” with its Rosneft investment.

America will be encouraged that, even so, sanctions are having an effect. This week the IMF again lowered its forecasts for Russia’s economy. Yet Mr Putin shows no sign of budging. Secure in his popularity at home, he may accept more economic pain as the price of extending Russia’s influence. It remains to be seen if stealth sanctions can be intensified to the point where Russia’s leader has to “change his calculus”, as Barack Obama hopes. If not, the West will have to choose between backing down or detonating bigger and cruder devices