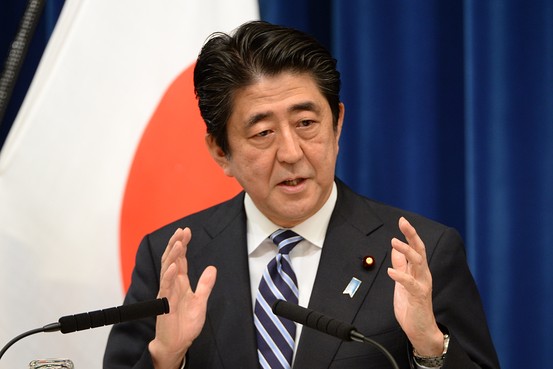 The total value of foreign direct investment by Japanese companies rose 35% from a year earlier to a record ¥13.248 trillion ($130 billion) during 2013, according to data released by the Ministry of Finance Tuesday.

Unfazed by a sharp decline in the yen’s value that makes foreign ventures more expensive, Japanese companies sharply expanded their investments in the world’s major markets, including Southeast Asia, the U.S. and the European Union.

One notable exception was China, where the amount of Japanese FDI shrank by 18% to ¥887 billion, the first decline in three years. The drop signals that as bilateral tensions continue to soar over a territorial dispute, Japanese companies are growing more cautious about business prospects in China after pouring money into its fast-growing economy for years. Corporate executives have said rising production costs and a slowdown in domestic demand in China are also worrisome. 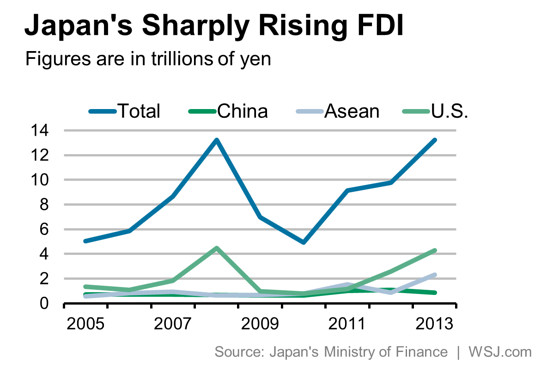 In contrast, companies showed strong appetite for expanding operations in other Asian markets, such as Thailand and the Philippines. The amount of new FDI in the member countries of the Association of Southeast Asian Nations rose to ¥2.33 trillion, nearly triple the previous year’s level and sharply higher than the previous record of ¥1.55 trillion reported in 2011.

Within Japan, corporate spending has been more measured. For the fiscal year that ended in March, companies surveyed by the Ministry of Economy, Trade and Industry estimated their capital spending would grow just 8.0% from a year earlier.

Japanese companies’ ravenous appetite to expand business overseas creates a challenge for Mr. Abe’s growth-enhancing economic policy known as Abenomics. One key aspect of the policy was an effort to weaken the yen to help shore up the bottom line for Japanese exporters. But the latest data show that Japanese manufacturers, while enjoying a profit recovery, accelerated their investment overseas, rather than taking steps to boost exports. The long-term outcome of their increased overseas production is declines in exports from Japan, which weighs on the nation’s economic output.