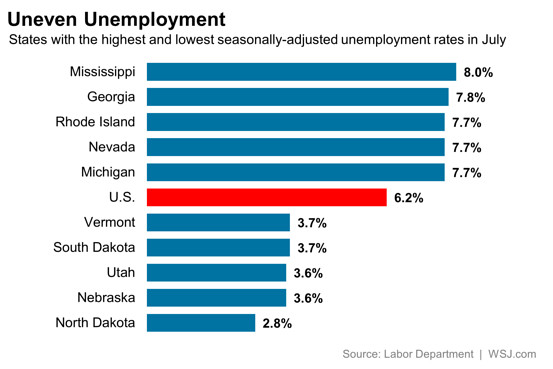 The employment boom in the West isn’t confined to energy-rich North Dakota.

Utah has emerged this year as a job creation leader, according to Labor Department data released Monday. The state’s July unemployment rate of 3.6% ranks only behind North Dakota’s minuscule 2.8%. Utah payrolls have grown by 2.5% over the past six months, also second-best in the country.

While energy is a growing field in the state, the tourism and technology sectors have been strong and financial services is expanding, she said. Salt Lake City has the highest number of Goldman Sachs employees in North America, after New York.

Utah was “hit harder during the downturn, but it’s recovered more quickly the rest of the country,” Ms. Gochnour said. She also serves a chief economist for the Salt Lake Chamber.

In the past six months—a time when the country as a whole added better than 200,000 jobs each month—Utah added a total of 33,000 jobs to payrolls. That outpaces much larger states such as Virginia, New Jersey and Illinois.

In contrast, the labor market in several southern states appears to be in a summer swoon.

Neighboring Georgia’s rate rose to 7.8% from 7.4% and nearby South Carolina jobless rate similarly ticked up to 5.7% from 5.3%.

The numbers show a bit of reversal in what had been one the areas of the country improving the most over the past year. Tennessee’s jobless rate had fallen to 6.4% in May from 8.4% in July 2013. The rate in Georgia fell 1.1 percentage points over those 10 months and the rate in South Carolina had fallen 2.4 points.