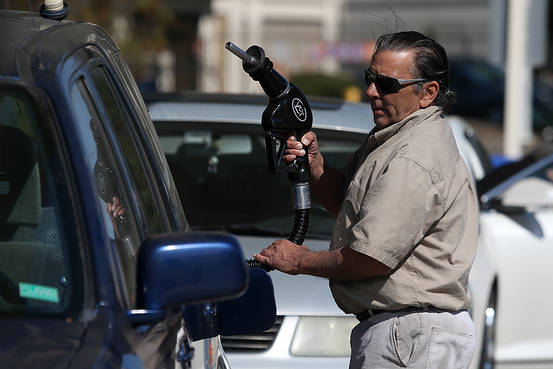 Inflation hits households differently. Someone whose most painful expense used to be their commute might be feeling pretty good with a 2.5% raise and gas prices half what they were a year and a half ago.
JUSTIN SULLIVAN/GETTY IMAGES

Today’s jobs report showed that average hourly earnings rose by 2.5% from a year earlier, a figure that many economists have flagged as disappointing. After all, compared with wage growth in the 1980s, 1990s and mid-2000s, today’s wage gains appear to be on the lackluster side. 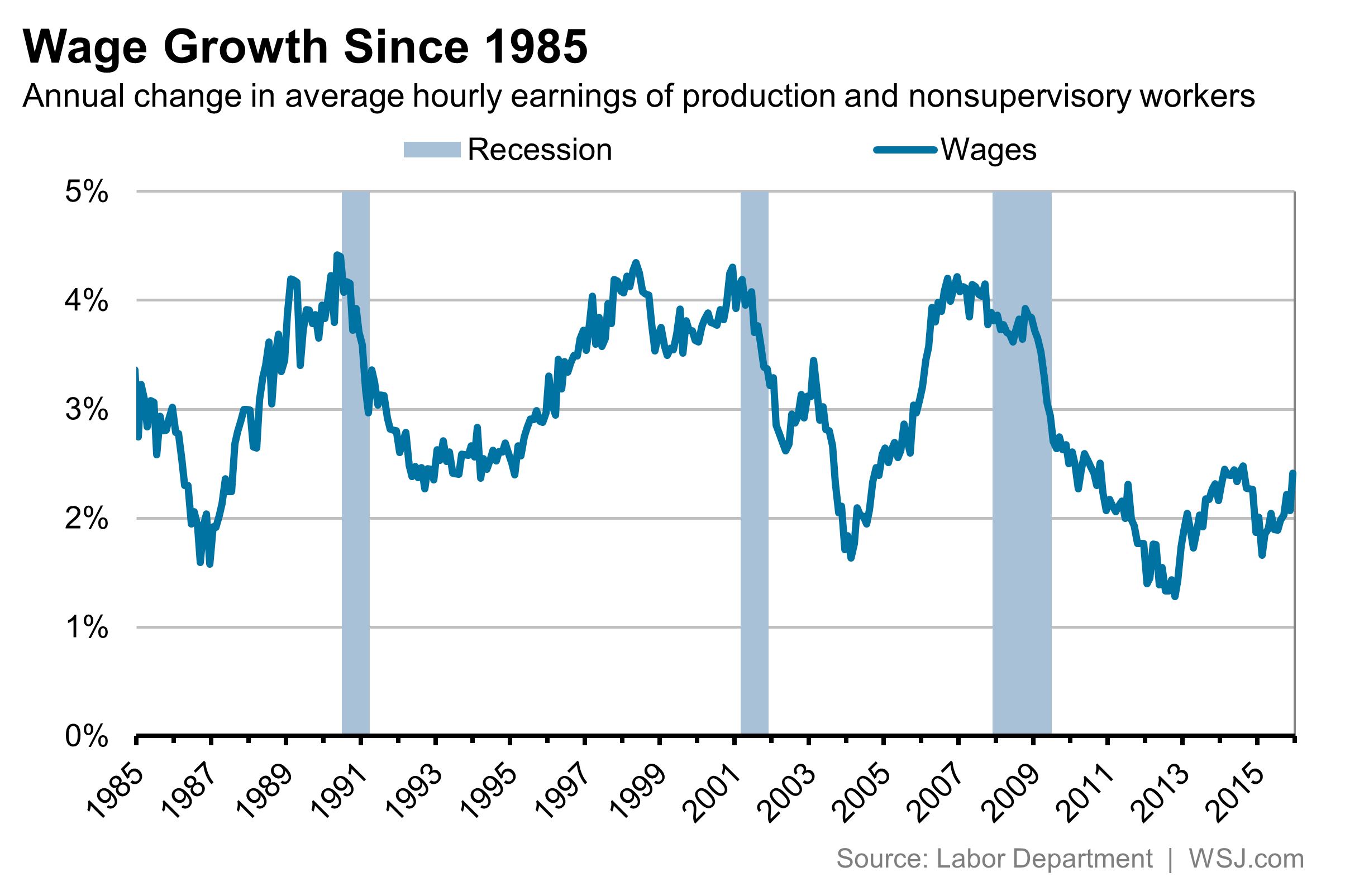 The above chart shows wages for all nonproduction and supervisory workers over the past 30 years. It’s not adjusted for inflation, and we’ll get back to that.

Today’s sluggishness appears to be quite broad-based. For the most part, it’s not the case that jobs are being disproportionately generated in industries with low wage growth. In fact, the relatively low rate of wage growth is common across industries. The fastest-growing industry is utilities and the slowest-growing is transportation and warehousing, but both are on the small side, with only about half a million utilities workers and a bit under five million in transportation. The vast majority of the nation’s 143 million payroll employees are in industries with slow growth. 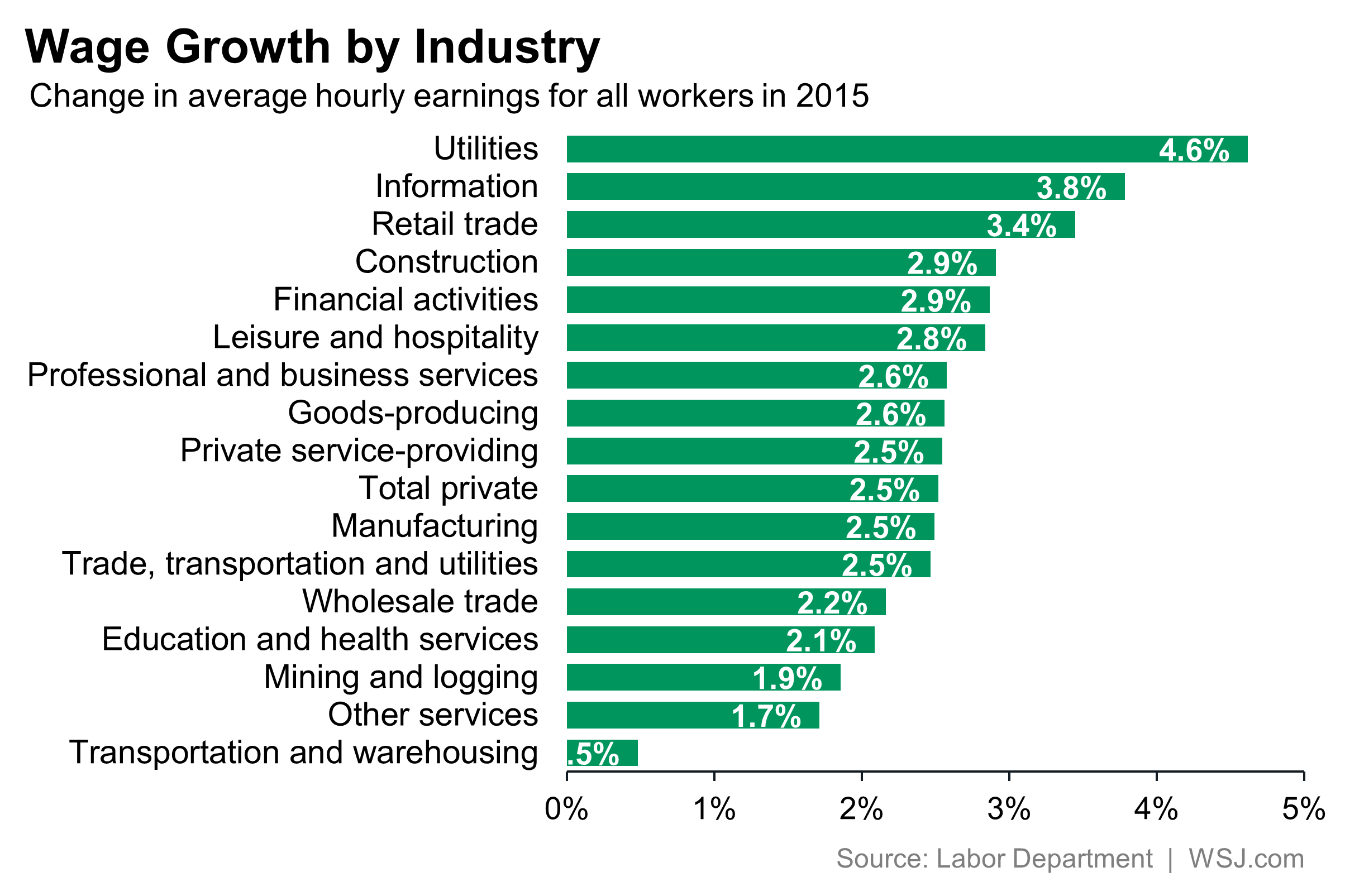 These figures are being closely watched by everyone from presidential campaigns attempting to anticipate the mood of the electorate to Federal Reserve policy makers trying to determine how quickly to raise interest rates. But interpreting the figures is not as easy as gauging whether wage growth is up or down. To see why, consider what wages have done over the past 50 years. 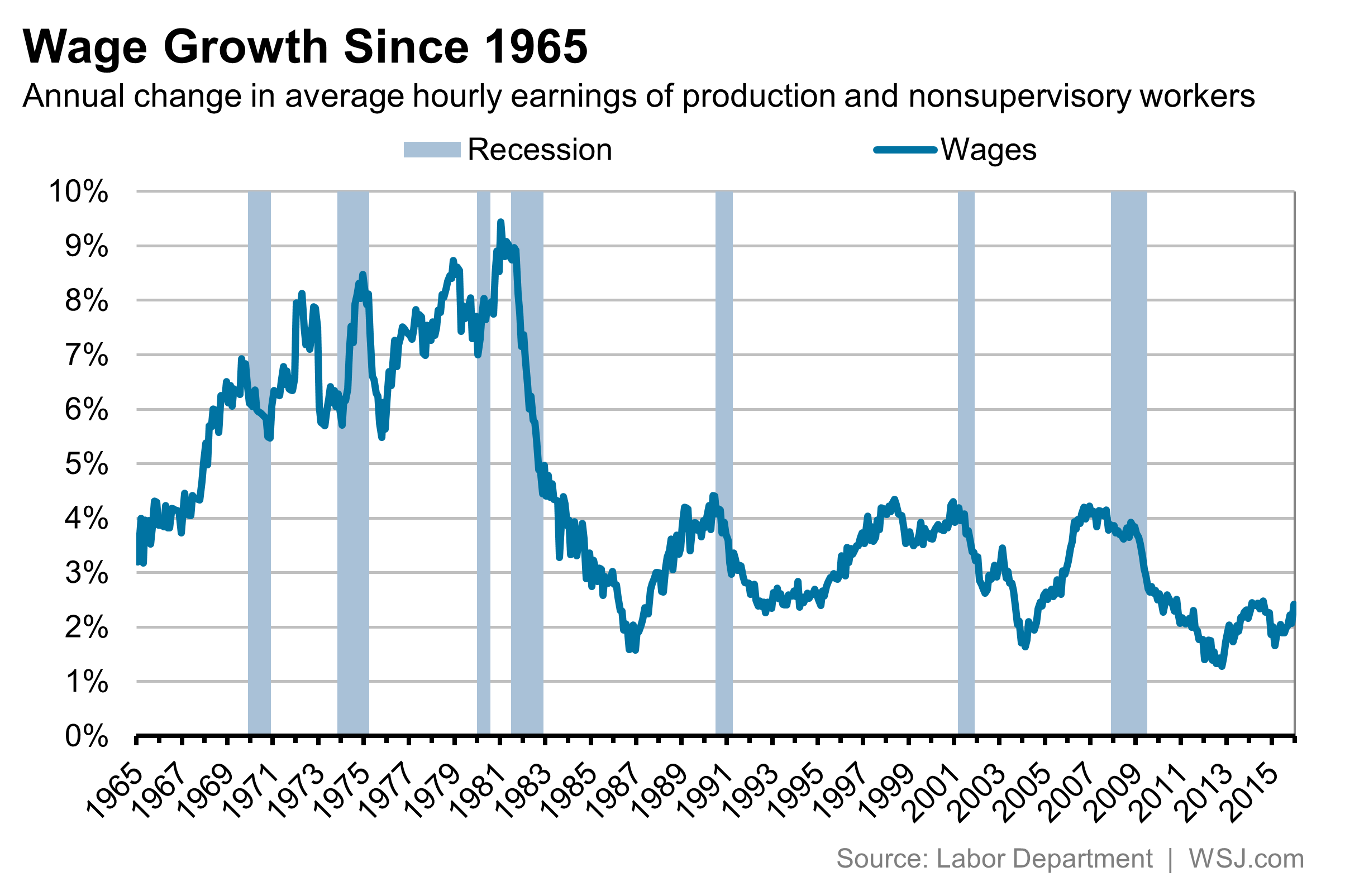 The last three decades appear to be a considerable disappointment compared with the late 1970s, when wages were growing at nearly a 10% clip. But wait a moment, the late-1970s? Is something missing from this chart? The 1970s is an era that many people (especially economists) remember as an era of underwhelming growth and unrest. The era of stagflation.

In fact, stagflation is exactly what’s missing from the chart above. Yes, wages were rising, but inflation was rising even faster. The tendency of economists and other commentators to ignore inflation when talking about today’s lackluster wage growth implies that the 1970s were the best era on record, rather than one of the more disappointing.

When accounting for the inflation rate, a very different picture begins to emerge—both looking back at the past and considering the situation today. 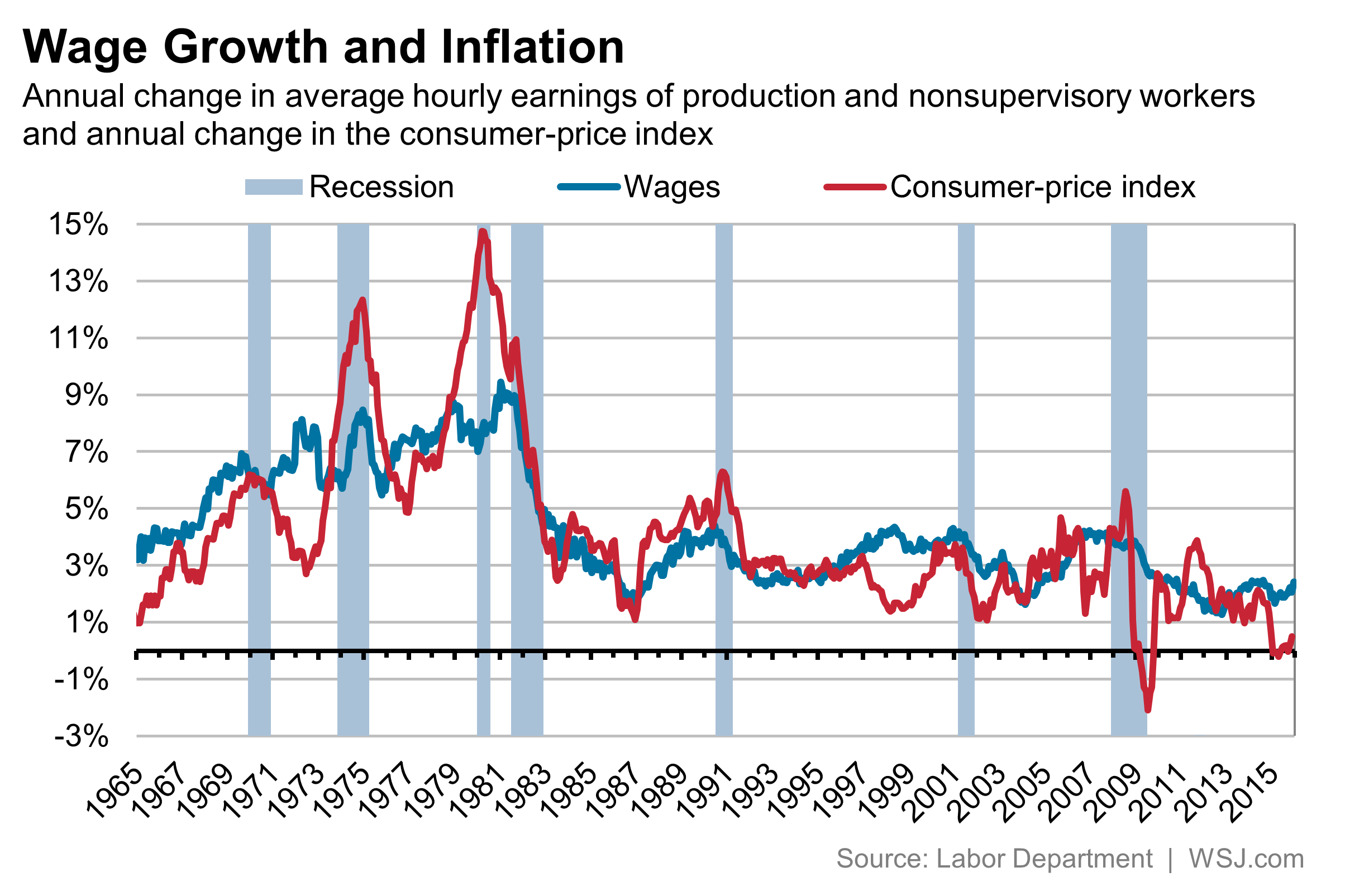 In the 1970s, wages spent years struggling to keep up with inflation. By contrast, the late 1990s are generally considered a good era for the labor market and for household incomes. Wages weren’t expanding unusually rapidly, but they were expanding much faster than inflation. Many measures of consumer confidence reached their peaks in the late 1990s, showing that the improvement wasn’t just some statistical trick—it really trickled through to the sentiment of most workers.

Today is a more extreme test of that divergence from the 1990s. Inflation is even lower, most visibly due to the surprising persistence of low oil prices, but also due to the strong dollar, which is helping make import prices cheaper. Yes, people’s paychecks are growing slowly, but their inflation-adjusted paychecks have been growing at a clip that may even be considered healthy.

Inflation hits households differently. Someone whose most painful expense used to be their commute might be feeling pretty good with a 2.5% raise and gas prices half what they were a year and a half ago. Somebody who takes the train to work and is preoccupied with paying college tuition, or facing a major rent increase from their landlord, however, might feel quite differently about that 2.5% raise. 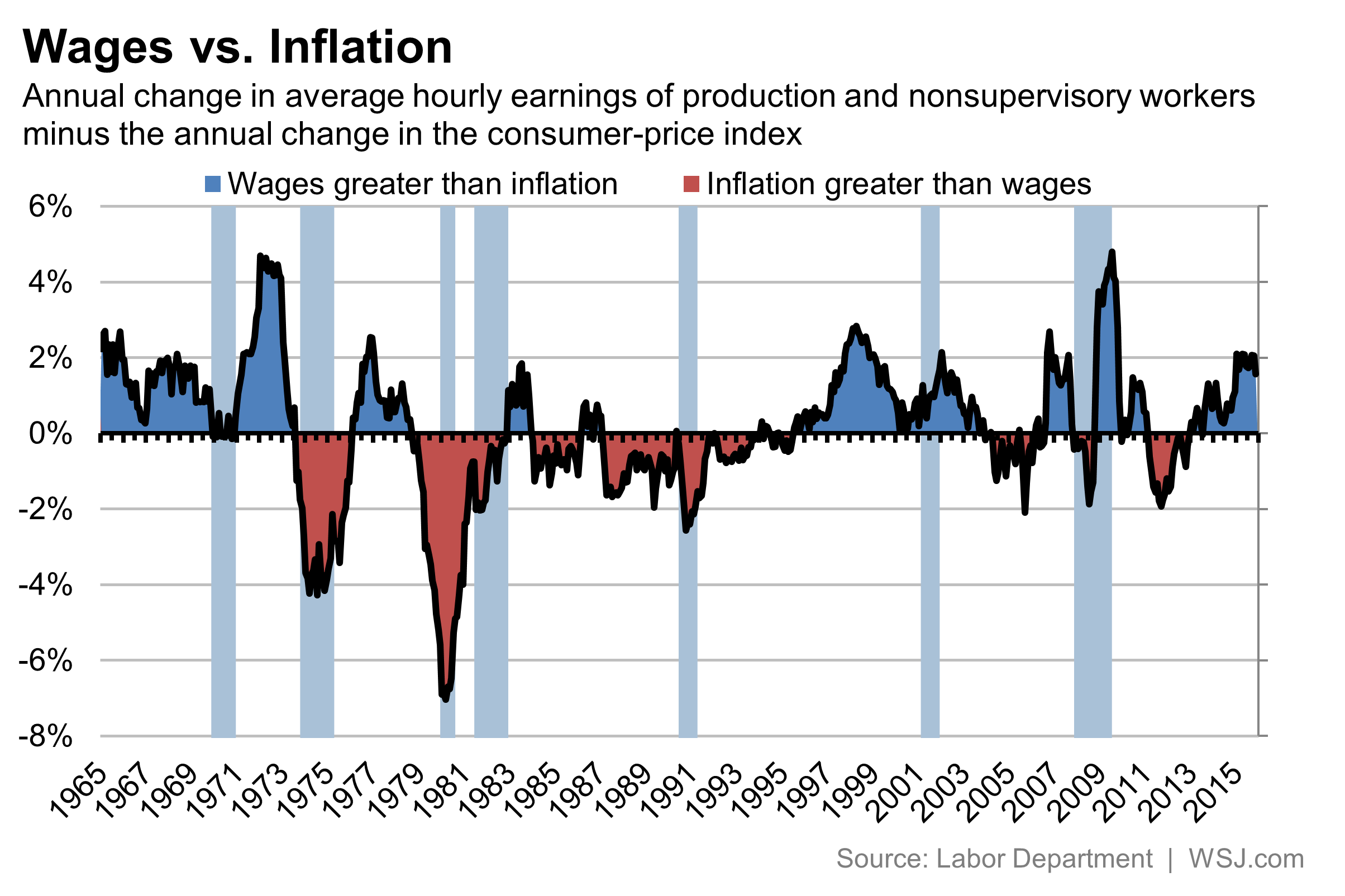 December Jobs Report: Everything You Need to Know