Hillary Clinton said in an interview with Charlie Rose that the difference between Bill Clinton and Ronald Reagan‘s presidencies were “night and day in terms of the effects, the number of jobs that were created, the number of people lifted out of poverty — 100 times more when Bill was president.” Earlier we examined the jobs record, and here we’ll look at poverty over the years.

Here’s the U.S. Census Bureau’s data on the U.S. poverty rate since 1959, along with who was president. 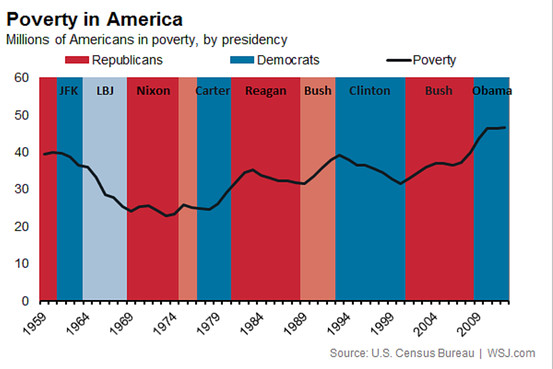 It turns out, however, that changing the years to focus on the last full year someone was president produces quite a different result. Instead of comparing Mr. Clinton from 1993 to 2001, what if you use 1993 to 2000. And for Mr. Reagan, use 1981 to 1988 instead of 1981 to 1989. With those different end years, the presidential poverty record changes.

Under this new tally, Mr. Clinton pulled 7.7 million people out of poverty, while Mr. Reagan pulled out only 77,000. So by this very particular metric, that really is 100 times more.

But is this a good way to look at poverty? The American population has grown rapidly since 1959, and so studying the poverty rate shows whether or not changes are driven mostly by population or genuine deterioration in the fight against deprivation. 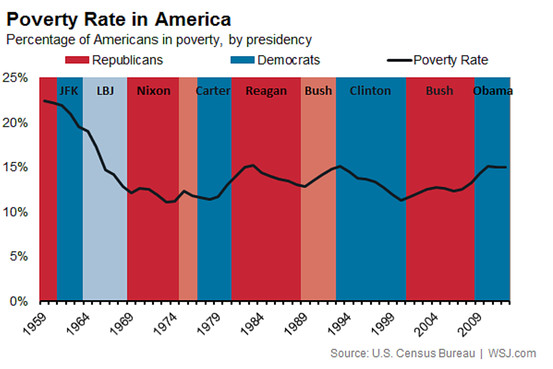 This tells a different story. From the 1950s to early 1970s, the U.S. was seeing significant gains against poverty. Those gains have since dwindled and the poverty rate has bounced around between 11% and 15%. The rate declined during all of Mr. Clinton’s presidency and the second half of Mr. Reagan’s presidency.

(It’s worth a quick caveat here that comparing poverty is more difficult than comparing jobs. Broadly speaking, it’s fairly simple to establish whether someone has a job. In 2013, a family of two parents and two children was in poverty if they earned less than $23,624. It’s fairly arbitrary to say that the exact same family, with $23,625 is suddenly “out of poverty.” The official poverty definition is based off “money income before taxes and does not include capital gains or noncash benefits such as public housing, Medicaid, and food stamps.” Using alternate definitions of poverty could produce very different pictures.)

Furthermore, the poverty rate, like the jobs rate, is heavily influenced by whether the economy is in recession.

In a trend that’s not particularly surprising, the poverty rate has tended to decline when the economy was growing and to rise around recessions. The three periods in which poverty made significant declines in the past 50 years were the long economic expansions of the 1960s, 1980s and 1990s.

Mr. Reagan’s record on jobs appears diminished because a deep recession occurred shortly after he took office, and that recession also caused an uptick in poverty during the beginning of his presidency. 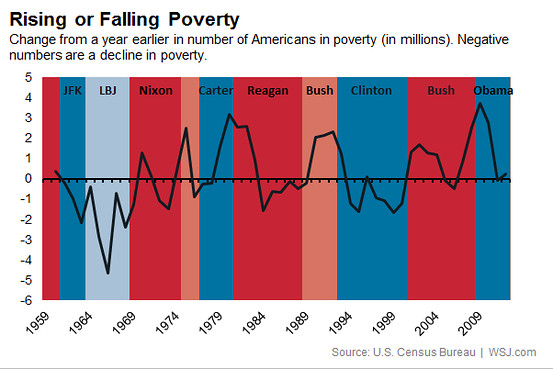 But as the chart above showed, poverty only rose during the first years Mr. Reagan was in office. By 1984, the number of people in poverty fell by over 1.6 million and declined in the remaining years of his presidency, though not as strongly as most year’s Mr. Clinton was in office.

So Mr. Clinton had 100 times more people leave poverty by one very particular metric under his presidency than did so under Mr. Reagan. But overall, both saw robust levels of job growth and saw declines against poverty (that proved to not last in subsequent years). As with their record on jobs, much of the gap between Mr. Reagan and Mr. Clinton’s tenures is driven by the recession that began just a few months after Mr. Reagan took office.