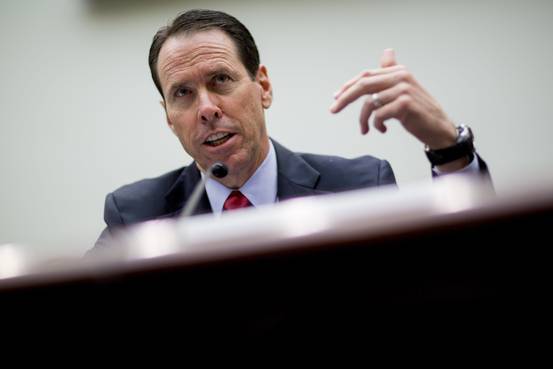 Squabbles in Washington are threatening to slow the economy in the coming months, according to a group of chief executive officers at large U.S. companies.

The Business Roundtable quarterly CEO survey, released Tuesday, found that more top executives expect to reduce staff and capital investment over the next six months, compared with their view in the spring.

“We have a problem where domestic policy is not supporting investment, hiring and economic expansion,” said AT&T Inc. CEO Randall Stephenson, who serves as chairman of Business Roundtable. The group includes top executives from among country’s several hundred largest companies.

He pointed to Congress —even above Federal Reserve policy or signs of global economic slowdown—as the top impediment to business expansion in the U.S. Businesses could be negatively affected if Congress is slow to act on funding the government beyond the end of this month and increasing the country’s ability to borrow later this year, Mr. Stephenson said.

“CEOs need to be assured the government is not going to shut down because policy makers can’t agree on spending priorities,” he said. “We can’t control China and we can’t control international markets, but we can control our own variables, and that’s getting budget deals and finding tax certainly.”

The survey found that 33% of CEOs plan to increase employment at their firms in the next six months, about in line with the prior quarter, but 32% plan to cut staff versus 26% the prior quarter. The share of CEOs expecting to increase capital investment rose to 41% from 35% last quarter, but the share planning to reduce investment also increased to 20% from 13%. In addition, fewer CEOs forecast sales growth over the next six months.

The Roundtable uses those readings to compile the CEO Economic Outlook Index. This quarter’s index fell to 74.1 from 81.3 in the second quarter. The third-quarter reading is the lowest since the fourth quarter of 2012, but still indicates economic expansion.

Separately, the CEOs forecast the economy will grow at a 2.4% rate over the next year, a slight 0.1 percentage point downgrade compared with their expectations three months earlier. The third quarter survey of 141 CEOs was conducted between Aug. 5 and 26.

Mr. Stephenson said businesses are much more concerned about the federal budget and the international turmoil than they are about the Fed’s decision on whether to raise its benchmark interest rate from near zero.  Central bankers will consider the first rate increase since 2006 at a meeting this week.

A quarter-point hike is “not going to have an effect on how CEOs invest and hire over the next 12 months,” he said.

Prepare for the Return of Budget Battles, Debt Drama and Other Washington Uncertainty