It’s increasingly looking like another ugly winter for the U.S. economy. Whether the main culprit is nasty weather, a limping global economy or woes in the U.S. energy sector, this much is clear: Companies aren’t doing much investing.

Wednesday’s Commerce Department report on durable goods showed a 1.4% decline in orders for big-ticket items—refrigerators, cars, bulldozers–in February from January. The overall figure includes products like airplanes that don’t say much about underlying demand in the economy.

The more-telling detail is a measure within the report that reflects how much businesses are spending to invest and expand their operations—demand for things like computers, equipment and software. That gauge–orders for nondefense capital goods excluding aircraft—also fell 1.4% from January, and is flat this year compared to the first two months of 2014.

Such orders have been falling on a monthly basis since August. The year-over-year trend, used to even out volatility, shows that growth in capital spending by businesses has slowed substantially since October: 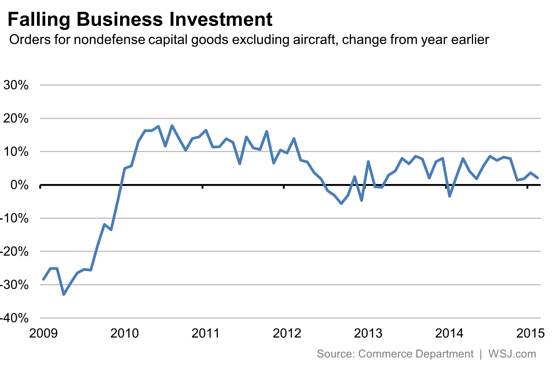 It’s unclear from Wednesday’s report which industries are cutting back the most. But the decline in business investment has coincided with rise in the dollar and the sharp drop in oil prices since last summer. Wednesday’s report showed machinery posted a particularly big decline last month, likely reflecting lower demand for drilling and construction equipment. Capital spending “is being swamped by the speed of the oil cutbacks,” Pantheon Macroeconomics chief economist Ian Shepherdson said in a note to clients.

Weak business spending—along with other factors like a downbeat export picture—prompted some economists to downgrade their assessments of how much the economy expanded in the current quarter. Morgan Stanley said it now thinks gross domestic product grew at a 0.9% annual rate in January through March instead of its prior estimate of 1.2%. Macroeconomic Advisers lowered its estimate a tenth of a percentage point to 1.4%.

Such growth would mean the economy grew at roughly half the pace of the fourth quarter’s 2.2% expansion—and would pale to the third quarter’s blowout 5% growth.