We’re at our Lowest Level of Misery in 56 Years, Thanks to Gas Prices – Real Time Economics

By one measure, the U.S. economy is the best it’s been since the presidency of Dwight Eisenhower. The recent plunge in inflation has helped drive the U.S. Misery Index to its least miserable level since the spring of 1959. 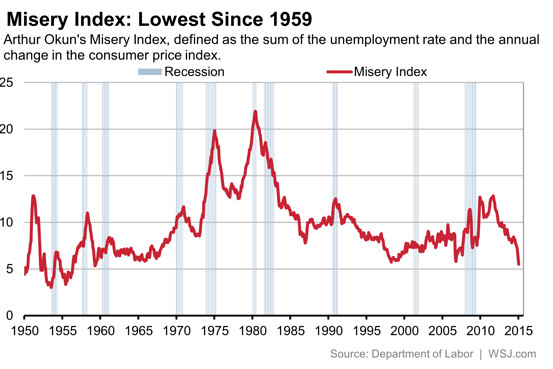 The Misery Index was proposed by the economist Arthur Okun in the 1970s, while he was a scholar at Washington’s Brookings Institution. When Mr. Okun proposed the index, the U.S. was in the grip of stagflation — a period of both high unemployment and high inflation. To capture the era’s misery, Mr. Okun (who had been on Lyndon Johnson’s Council of Economic Advisers) proposed simply adding the unemployment rate and the annual inflation rate into a new number.

The index captured the economic anxiety of the time. Not only were many people struggling to find work in the 1970s, they were also grappling with accelerating price gains. The Misery Index reached an apex of 21.9 in May of 1980 when the unemployment rate was 7.5% and the inflation rate was 14.4%, as measured by the Consumer Price Index. The inflation of the era was finally brought under control when Federal Reserve Chairman Paul Volcker pushed interest rates as high as 20% to throttle the price gains. Inflation came down quickly, unemployment followed it down a few years later, and the U.S. settled in for two mostly good economic decades in the 1980s and 1990s.

During the most recent recession, the Misery Index peaked in September of 2011, when the unemployment rate was 9% and the inflation rate was 3.8%. It was the highest level of economic misery recorded since the early 1980s.

Since then, inflation has trended downwards and the unemployment rate has declined. But the current 56-year-low reading of the index is something of an anomaly. Inflation has plunged primarily because of the global collapse in oil prices. In January, the annual inflation rate fell by -0.1%. 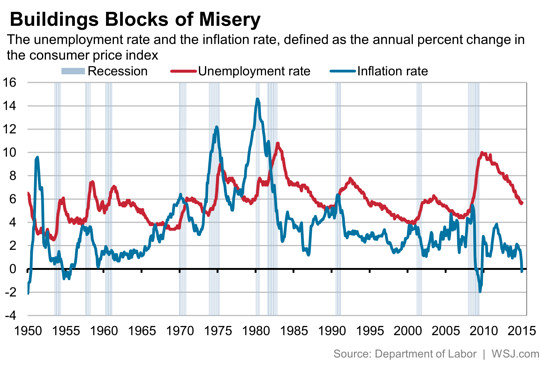 This places the economy in a position that would have seemed impossibly remote in the 1970s, when Mr. Okun proposed the index. Inflation is so low that many economists consider it a problem. The labor market has improved, but economists and officials at the Federal Reserve believe that the unemployment rate understates the labor market’s continued weakness. For example, the unemployment rate does not include people with part-time jobs who would like full-time work (which is very high right now). Nor does it include people so discouraged that they’ve given up hunting for jobs entirely (this clearly happens, but economists don’t really know how much).

In other words, both today’s low unemployment and low inflation carry significant caveats.

Still, the Misery Index captures two things that are vexing for households — unemployment and inflation. When these things are low, many households truly feel much better off. Economists may have caveats about the Misery Index; but consumers have fewer hang-ups. The Conference Board’s measure of Consumer Confidence and the University of Michigan’s Consumer Sentiment index in January reached the highest since 2007 and 2004, respectively.

Maybe these aren’t the best of times, but consumers and the Misery Index agree: they are far from the worst of times, too.