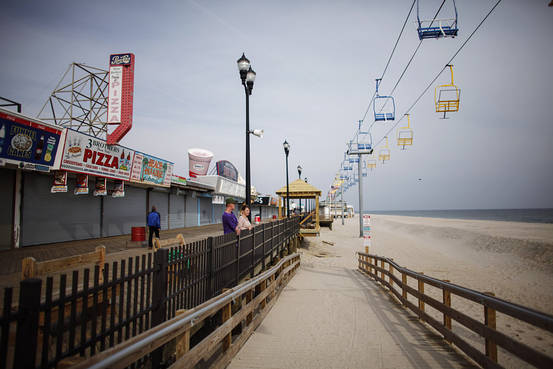 People stand on the Seaside Heights boardwalk in New Jersey two years after superstorm Sandy on Oct. 29, 2014. It’s now been nearly three years since the storm, and researchers at the Federal Reserve Bank of New York say communities’ ability to borrow helps explain their pace of recovery.
KENA BETANCUR/GETTY IMAGES

Income and wealth can tell us a lot about a community’s ability to bounce back from a disaster—be it a financial crisis, hurricane or destructive protests. But there’s another metric that’s often overlooked: the ability of a community to access credit.

In the years since the financial crisis, experts have analyzed the income and assets of U.S. households to help explain why some communities were hit so much harder by the downturn, and have taken longer to recover. High unemployment, stagnant wages and the massive hit to household wealth caused by plunging home prices held back the recovery in pockets of the country.

But researchers at the Federal Reserve Bank of New York had a different idea in the wake of superstorm Sandy, which caused tens of billions of dollars in damage to businesses and homes in New York and New Jersey.

The ability to borrow, they argue, is just as critical to explaining discrepancies in the pace of recovery. The more people in a community who are able to access credit, the greater the ability to help the entire community move forward when times are tough—say, by redeveloping a dilapidated storefront, opening or expanding a business or buying a new home.

Call it financial resiliency. That’s the idea behind the New York Fed’s Community Credit project, an interactive graphic that provides a snapshot of the financial health of every county in the entire country.

“If you think about a group or the community, I’m looking for how many people are positioned should something happen, to be able to bring resources in addition to what the community can bring on its own,” said Kausar Hamdani, a senior vice president at the bank and one of the project’s directors.

It looks first at how many borrowers in a particular county or state even have a credit file—a near-universal prerequisite for borrowing. It also measures how many have a revolving credit account, and looks at what percentage of available credit they’re already utilizing. In other words, how many people are positioned to borrow if they need to?

On the stress side, the graphic shows the average credit score for a particular community, the share of borrowers based on their prime rating, and their delinquency rates—not just for mortgages, but any debt payments.

Perhaps most importantly, it illustrates how those trends have changed over the past several years. The graphic pulls data from the Fed’s quarterly consumer credit panel, along with population data from the Census Bureau.

After Sandy hit the New York area three years ago, Ms. Hamdani said researchers noticed that communities geographically close to one another were responding to the aftermath in markedly different ways.

A look at the data showed those communities had much different credit profiles. For example, at the end of 2011, borrowers in Essex County, N.J., were nearly twice as likely to be considered subprime as borrowers in neighboring Bergen County. While nearly half of all borrowers in Morris County were using less than 30% their available credit, less than a third of borrowers in Cumberland County could say the same. Now, it’s difficult to draw a direct connection from credit capacity to recovery, Ms. Hamdani said. For one, the data don’t capture the extent to which some unbanked or underbanked communities rely on alternative financial services, such as payday or other online lending.

Other factors also come into play. Following Sandy, for example, many communities benefited from federal and state disaster aid. But their ability to access credit arguably played a role in the way the recovery took shape.

“If you step back from disasters, resiliency is a really much broader context,” Ms. Hamdani said. “It’s not just about the negatives. It’s also how to make things go forward.”