What if the China Panic Is All Wrong? – Real Time Economics 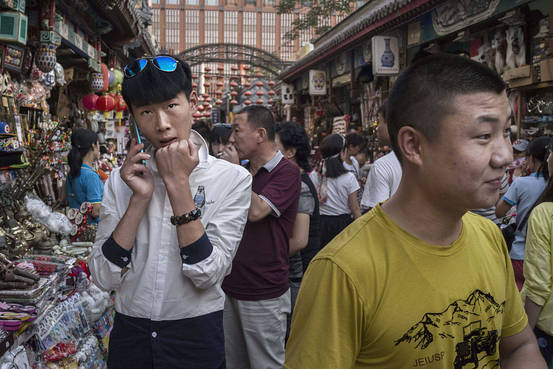 Chinese consumers walk in a market last week in Beijing. China’s government is relying on domestic consumption and services to sustain economic growth amid a slowdown in manufacturing and exports.
KEVIN FRAYER/GETTY IMAGES

China’s stock-market routs and economic deceleration are widely cited as the major trigger for the latest round of global market volatility. But what if the dominant narrative about China—that the world’s No. 2 economy is on the verge of falling off a cliff—is wrong?

It would mean the global market turmoil hitting equities, commodities and currencies is an overreaction.

“We may have seen overshooting,” said Hung Tran, executive managing director of global capital markets at the Institute of International Finance, an industry group representing around 500 of the world’s largest banks, funds and other financial institutions.

Even the head of the International Monetary Fund indicated as much earlier this week.

One of the chief problems is that it’s difficult to gauge China’s black-box economy. The country’s true growth is a guessing game given a number of statistical factors. That’s why growth forecasts show a range spanning several percentage points. Lombard Street Research, for example, estimates the economy will only expand by 3.7% this year, nearly half Beijing’s official growth forecast.

Even if China’s economy is healthier than many now fear, uncertainty is oxygen for market volatility. More clarity from Beijing about growth prospects and crisis-management plans would likely prove fruitful. That’s why the U.S. plans to press Chinese officials for greater details on their policy plans at a meeting of finance ministers and central bankers from the Group of 20 largest economies late this week.

Here are some of the arguments that might moderate market fears:

“Investors should not get carried away by the collapse of the Shanghai Composite Index,” warns Melanie Debono from Capital Economics in note to clients, “not least because its performance often bears little relation to that of the economy, primarily due to wild swings in its valuation.” The market run-up in advance of the selloff was out of step with reality, says Nick Lardy, a China expert at the Peterson Institute for International Economics. That’s why he says there’s likely more to come in the Chinese market correction. Even after the rout, “The market was still trading at 39 times earnings. Give me a break, it’s still too high.”

• The devaluation of the renminbi likely isn’t Beijing scrambling to save the economy through competitive devaluation.

Beijing’s depreciation was likely more about addressing a key concern for the International Monetary Fund as it considers whether to include the Chinese yuan in its basket of currencies that comprise its lending reserves than it was about reviving economic growth by juicing exports.

On Aug. 11, Beijing changed the way it values the yuan, allowing markets to play a greater role in the exchange rate. Market pressure has long been for depreciation, so allowing the currency to be more market-determined would, in the near-term, naturally see the yuan move lower.

Against a basket of global currencies, the yuan has appreciated over the last year by nearly 15%, accounting for inflation. That’s despite Beijing intervening for months to prevent the yuan from losing value.

“So the fact that the yuan came down 3% to 4% is not going to make much difference,” said Ted Truman, a former top international finance official at the U.S. Treasury and the Federal Reserve.

• GDP growth may not be nearly as bad as suspected.

Economists such as Clare Howarth at Oxford Economics say that beyond official industrial production figures, data on car and cell phones sales are jacking up the risk that China’s growth stalls.

But “critics are really overlooking the fact that the growth model has changed in China,” Lardy says. “The service sector is now the driver of growth. So the fact that industrial growth has slowed down quite a bit does not mean, as it would have meant 10 years ago, that the economy is falling off a cliff.” Joe Hockey, treasurer for an economy that is intimately tied to China, Australia, says market reactions have been overblown.

“We’re confident about our understanding of the Chinese economy and we see over time huge opportunities for growth,” Mr. Hockey told the Journal.

• Rather than regressing to policies of old, China’s government has actually been showing signs of moving ahead with market reforms.

Beijing’s economic policy makers know that even though structural overhauls will moderate growth in the near-term, they’ll also bolster long-term growth and help stave off a major deceleration.

In fact, Beijing has moved ahead with promised plans to liberalize the economy. For example, even amid the major stock-market correction, Beijing opened up the interbank markets to central bankers, sovereign wealth funds and financial institutions. The central bank has also been moving ahead with interest-rate liberalization, though in more measured steps than perhaps many in the U.S. would prefer.

After Two Weeks of Market Turmoil, What’s Changed? Not Much