What Links A Prime Minister, A Hospital And A Gambling Supremo?

What Links A Prime Minister, A Hospital And A Gambling Supremo?

It’s been home to coal magnates, a gentlemen’s club, a serial prime minister, injured first world war officers and Russian fashionistas. 10-11 Carlton House Terrace — now inhabited by the British Academy — are two of 18 buildings designed by John Nash between 1827-1833, overlooking the Mall. Here, we explore the secrets behind the facades of number 10 and 11.

The king who recycled

Before Carlton House Terrace, there was Carlton House. This was home to the Prince Regent, but when His Pudginess ascended to the throne in 1820, he decreed the pad was no longer grandiose enough for his liking. He had the place torn down, and upped sticks to Buckingham Palace, as you do. Fortunately, the man who’d just become George IV was good enough to do some recycling; the portico of the former Carlton House now forms the front of the National Gallery.

The stairs that changed colour

Coal magnates the Ridleys occupied number 10 Carlton House Terrace from 1831-1924, blinging up the place with resplendent ceilings, family coats of arms, Grecian statues and the like. The house, as one visitor put it ‘reeked of coal money’. The pièce de résistance is a black marble staircase, which oozes down into the lobby, like solidified magma. Helena Bonham Carter’s character swoops down the stairs in the film 1997 film Wings of a Dove. One small detail you might notice (21 seconds into the video below); the staircase is white, not black. It was painted especially for the film.

The dead man and the racehorse

In 1840, the notorious yet hugely successful gambling proprietor William Crockford hung up his roulette wheel and retired to 11 Carlton Terrace. As a force of habit Crockford continued to keep racehorses; the trouble was, racehorse winnings were only legit if the owner was alive, and Crockford’s friends (who’d placed a bet on Crockford’s nag) were horrified to discover on the eve of one of Crockford’s horses running, that the old man had snuffed it. The story goes — and it’s likely a well-embellished yarn — that the mates dressed up the dead man in his finest togs, propped him up in the window of his favourite club, and had him ‘doff’ his hat to passers-by, thus ‘proving’ he was still in rude health. The horse, apparently, didn’t win a penny.

The four-time prime minister and his doomed conservatory

Number 10 Downing Street might have been the traditional home of Britain’s prime ministers since 1735, but there were exceptions to the rule. Four-time PM William Ewart Gladstone lived in 11 Carlton House Terrace during his first tenure in charge of the country (he was here from 1856-75). The mutton-chopped Liberal loved nothing better than to sit in his study while his wife, Mary, played piano (much like David Cameron probably likes to listen to Coldplay on Spotify Premium today). Gladstone was also, it seems, liable to suffer from a case of keeping up with the Joneses; he spotted the conservatory on adjacent balcony of number 10, and decided to copy it, making sure his had even more glass. When Carlton House Terrace was skimmed by a bomb in 1940, Gladstone’s conservatory was wrecked and never rebuilt. The conservatory at number 10 survives to this day.

The house becomes a hospital

At the outbreak of the first world war, Lady Ridley (she of the coal family) began turning parts of number 10 into a hospital for injured officers. Drawing rooms became wards and the library was emptied of its books, becoming an operating theatre. Meanwhile a shanty town of wooden huts was knocked up on the terrace, for officers who’d been afflicted by gas attacks, and needed the fresh air. Lady Ridley liked to ‘entertain’ the officers with her piano playing. The officers weren’t so keen.

In truth, they were much more enamoured by the playing of young nurse Aileen Maunsell, better known as ‘Dinkie’ (so-called because of her size). The officers adored her, at least a couple of them pulling out the stops and proposing (she later married one). Dinkie also kept a diary, which is now held by British Academy archivist Karen Syrett. Not only does the diary give a strong sense of what it was like living in central London during the first world war, it makes a wonderful read — what with its adolescent use of nicknames and exclamation marks. 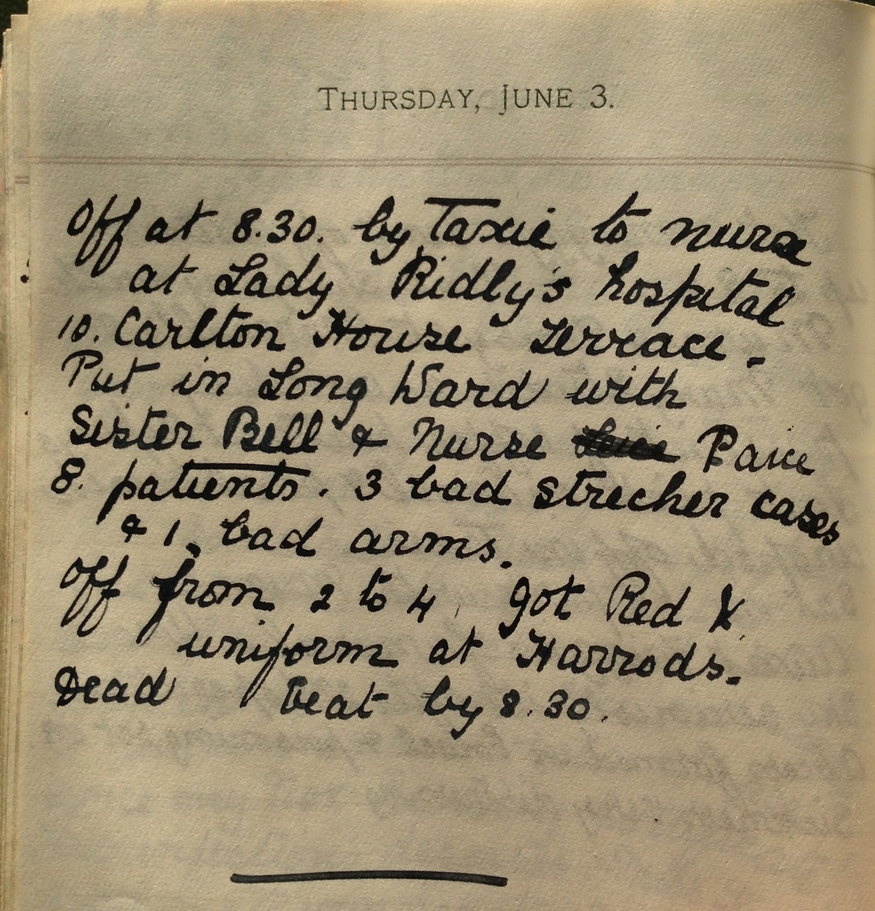 The Irishman paid to shoot billiards

In 1924, the days of Carlton House Terrace as a domestic residence came to an end. The Union Club — your typical Pall Mall gentlemen’s club — took over many of the rooms here, and port, smoking, billiards and absolutely-no-women-whatsoever-tahnk-you-very-much became the order of the day. Recently, the British Academy invited back a former Union Cuv employee, who reminisced about an Irishman employed to shoot billiards with lonely gents. The Irishman was apparently so good, he almost always won money off his opposite number.

The dead chicken and the biscuits

The British Academy — the UK’s national body for the humanities and social sciences — moved into Carlton House Terrace in 1998, introducing lots of new artworks, many of them, modern. One painting in particular that stands out is Six Academy Presidents, by Stuart Pearson Wright. The work, which won the BP Portrait Award in 2001, is based on circles (from teacups to the Millennium Wheel, to Jammy Dodgers, to the table itself). It’s also hard to ignore the dead, plucked chicken laid out among the tea service. That’s the artist’s contemporary equivalent of putting a skull in the picture, serving as a reminder that however great you might be in life, death awaits us all.

The Russians make a lawn

Aside from when it was inhabited from 1914-19 by injured officers, 10-11 Carlton House Terraces’s terrace has rarely been used. Not so the case in the summer of 2012; when Russian fashionistas Bosco (they designed the contentious kits for the Russian, Ukrainian and Spanish Olympic and Paralympic teams) temporarily moved into the premises, and turned the terrace into an English (AstroTurf) garden. The British Academy hopes to do something similar with the terrace in the future.

The British Academy offer a number of events and lectures, many of them free. Visit their website for more information.