But when it comes to overshooting 2%, the Fed’s choice of target becomes really important. The Fed targets the Personal Consumption Expenditures price index, not the better-known Consumer Price Index. As we’ve explained before, the PCE index is persistently lower than the CPI. 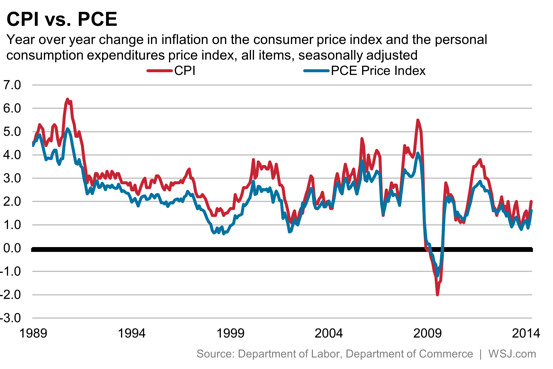 Over the past 20 years, the CPI has been, on average, about 0.5 percentage point higher than the PCE. And in some periods that gap has been even wider.

At the end of the 1990s, the gap between the CPI and PCE got even wider, averaging 0.9 percentage point during the final two years of the expansion and the 2001 recession.

The important thing to note is that, if this gap remains the same in the future, the Fed will be allowing CPI inflation of above 2%. The mid-point of Fed forecasts place the PCE index at 1.8% at the end of next year. But if the historical relationship holds, that would be a CPI rate of 2.3% using the longer-run average or as high as 2.7% using the gap that prevailed in the late 1990s. 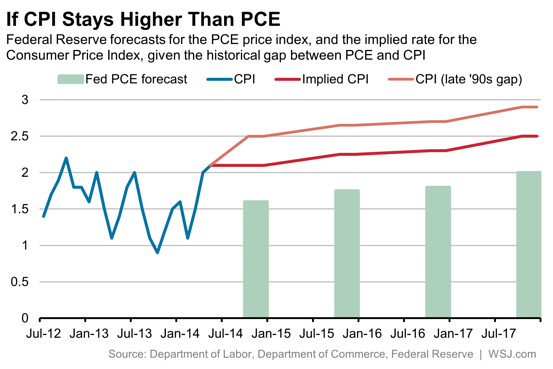 If  the Fed allowed PCE to overshoot to 2.5%, an example of a strategy some argue would bring about a stronger labor market, then the CPI would likely be allowed to rise to 3%.

Many economists prefer to look at core inflation, which excludes energy and food. But for the next few years the Fed’s forecasts for the two rates are nearly identical, so the story is the same if you focus on core inflation measures.

Another way to think about this gap is to consider how the Fed will react to CPI reports. If the CPI comes in at 2.5%, a misguided investor may think the Fed is overshooting its target and will soon react. But Fed officials will know that PCE inflation report, which comes out later in the month, is likely to be about 0.5 percentage point lower at around 2%, and may not consider themselves to be overshooting at all.