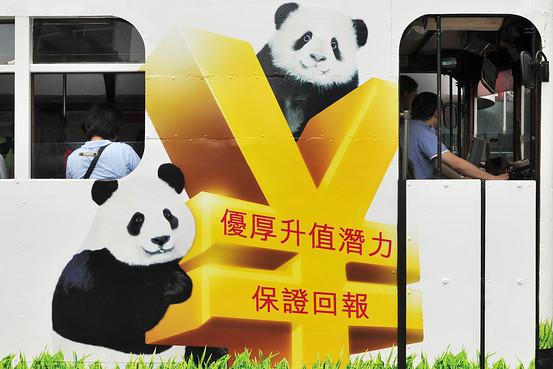 A yuan currency sign is seen on a tramway in Hong Kong on October 14, 2011.
Agence France-Presse/Getty Images

In decades past, surging export growth, declining imports and a record trade surplus would have been a cause for joyous celebration in China as Beijing honed its mercantilist model en route to becoming the world’s factory floor. These days, however, things are a bit more complicated.

On one side of the ledger, China’s 14.5% year-on-year export growth in July is certainly good news. Combined with reports of better July export growth in South Korea and Taiwan in recent days, if offers early hope that global trade is starting to pick up. July exports were up 17% to the European Union, 12.3% to the United States, and 11.9% to Southeast Asia.

“The improvement in export growth was broad-based in July,” HSBC said in a research note. “If this can be sustained for the next few months, this could be the beginning of a turnaround in regional trade.”

But China’s 1.6% contraction in July imports signals continued weakness in domestic demand, a concern as China scrambles to recover from the economic slippage seen early this year, suggesting that Beijing will continue its targeted stimulus measures.

“The mixed import figures hint at some uncertainty of the domestic economy’s near-term rebound,” J.P. Morgan economist Haibin Zhu said in a research note. “As such, we expect the government will continue to roll out pro-growth measures in the coming months. ”

China’s economy grew by 7.5% year-on-year in the second quarter, in line with Beijing’s annual 2014 growth target. The figure came as targeted stimulus spending kicked in and was a slight improvement over the first quarter’s 7.4% figure — which was an 18-month low.

The strong export figures are also a cause for a longer-term concern as China tries to rebalance its economy, experts say.

Even as the Chinese economy has grown into the world’s second-largest and growth has slowed from the double-digit levels enjoyed in decades past, Beijing has sought to expand consumption, services and high-tech entrepreneurship. It wants to move away from its traditional dependence on exports and investment in unneeded real estate projects, belching steel mills and metal-bashing state-owned companies to create a new growth paradigm.

But its continued reliance on exports and investment-led growth seen in recent statistics raise concerns that it’s putting off painful but necessary reform under pressure to reach short-term targets. Chinese officials say they haven’t given up on their reform agenda and argue that they can promote growth and enact reform simultaneously.

Trade figures tend to be volatile, and economists said July’s import contraction may be short-lived. To some extent the contraction may be affected by an investigation into recent commodity-financing irregularities. Furthermore, they said, strong exports tend to spur demand for imported materials needed to make those exports.

“It may be an irregularity in July,” said Bank of America Merrill Lynch economist Lu Ting. “I’m sure imports are growing faster than that.”

Although many countries would love to have their economies grow by 7%, China sees this sort of robust expansion as a near imperative as it seeks to find jobs for millions of young people entering the work force each year.