The first half of 2014 saw the U.S. economy’s strongest stretch of hiring since early 2006. The jobless rate fell to 6.1% in June from 7.5% a year earlier, its fastest one-year decline since October 1984, and nonfarm employers added a seasonally adjusted 288,000 jobs. 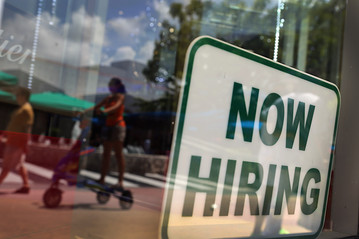 Can hiring keep up its strong pace in the second half of the year? We’ll get our first clue Friday at 8:30 a.m. EDT, when the Labor Department releases its jobs report for July. Economists surveyed by The Wall Street Journal expect payrolls to rise by 230,000 and the unemployment rate to remain at 6.1%.

Here are a few things to watch:

The June jobs report was strong in large part because hiring gains were broadly shared by sector. Professional and business services employment rose by 67,000, retail jobs were up by 40,000, health-care employment rose by 21,000 and manufacturers added 16,000 jobs. Even public payrolls grew, with federal, state and local agencies adding 26,000 jobs. Similar widespread gains in July’s report would be a further sign of broad improvement in the labor market.

Hiring accelerated in the first half of 2014, but overall economic growth did not. Gross domestic product, the broadest measure of output across the U.S. economy, fell at a 2.1% annual rate in the first quarter before bouncing back at a 4% pace in the second quarter. Wednesday’s stronger-than-expected GDP reading for the second quarter “eases some of the tension between payrolls and GDP data we have seen as of late,” BNP Paribas economists Bricklin Dwyer and Laura Rosner said in a note to clients. But the divergence between strong jobs growth and lackluster GDP growth still poses something of an economic mystery. Friday’s report will provide solid detail on the labor market side headed into the second half of the year.

In, Out and on the Fence

The labor-force participation rate in June was 62.8%, its lowest level since early 1978. While the participation rate appears to have bottomed out in recent months, it hasn’t started moving up again, which would be a sign that people are rejoining the workforce after previously giving up on finding jobs. Keep an eye, as well, on the long-term unemployed, people who have been out of work for more than six months. In June they totaled 3.1 million, roughly a third of all unemployed Americans, though their ranks had thinned by 1.2 million from a year earlier.

Average hourly earnings of private-sector workers rose 2% in June from a year earlier, in line with the sluggish wage growth seen in recent years. But a separate Labor Department report out Thursday that measures total compensation costs, the Employment Cost Index, rose 0.7% in the second quarter for its biggest jump since 2008. Friday’s July update on hourly earnings could signal if wages are indeed on the rise. Acceleration in wage growth could boost consumer spending, which is the mainstay of the U.S. economy. Continued sluggishness, on the other hand, could hold back spending and the economy as a whole. (Friday morning also will see the release of a Commerce Department report that includes the June reading for the Federal Reserve’s preferred gauge of price inflation, the personal consumption expenditures price index.)

The Fed is Watching

The Fed, in its policy statement Wednesday, acknowledged that the labor market is improving though it also noted that “a range of labor market indicators suggests that there remains significant underutilization of labor resources.” Fed officials will closely examine Friday’s jobs reports for signs of a tightening labor market – a rise in wage growth, a broad drop in unemployment – or signs of continued slack, such as a persistently low labor force participation rate. Either, or both, would feed into the Fed’s ongoing debate about when to begin raising interest rates, which have been pinned near zero since December 2008.