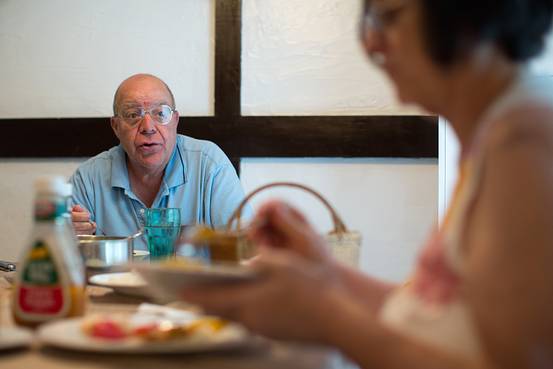 Ralph Paladino, 68, eats dinner with his wife, Rosemarie, at their home in Utica, N.Y. As a retired police officer, he’s one of 92 million Americans who don’t work, but also aren’t considered unemployed.
MIKE BRADLEY/BLOOMBERG

This sounds like a shocking statistic: 92 million Americans don’t work but also aren’t considered unemployed by the Labor Department.

The Labor Department only classifies people as unemployed if they are actively looking for work. All those who don’t have a job and aren’t looking are lumped together under the fishy-sounding classification “not in the labor force.” The share of Americans not in the labor force has been climbing for nearly 15 years, a development that even many economists and demographers failed to anticipate.

It may sound like a giant mystery: What are these 92 million Americans doing? Actually, we do have some idea. Big pieces of this chart are no mystery at all. About 41 million Americans don’t work because they’re retired. These retirees are overwhelmingly actually of retirement age. It makes perfect sense to consider them outside the labor force (another way of saying it makes little sense to consider them unemployed). But is there great mystery in the so-called prime working-age years—from the mid-20s to mid-50s? A recent article from the Financial Times was titled “U.S. statisticians are in the dark over the 20 million working-age Americans who don’t want a job.” But in fact, most of these people have a fairly straightforward reason attached to their absence from the labor force, too.

Many of these people aren’t working because they’re taking care of their families. Stay-at-home parents and homemakers and people caring for aging family members fall into this group. And as people age, an increasing number are disabled or ill. The most mysterious parts of the population are those who want a job and aren’t looking, and those who answer “other.” Among those who want a job and aren’t bothering to look, many are young. Very few Americans give some other reason for not being in the labor force.

The decline in labor-force participation since the late 1990s has caught the attention of economists and politicians alike. Some point to the figures as evidence that the economy is much worse than the 5.1% unemployment rate suggests. For many economists, this means the Federal Reserve and fiscal policy makers ought to do more to boost the economy and get people back to work. For others, it means the strategies thus far have been a failure.

So what has changed since 1999? You can see the impact of the baby boomers moving through this data. In 1999, the boomers ranged in age from their mid-30s to mid-50s—the ages that Americans are most likely to work. Today, those same individuals are in their 50s and 60s. But clearly it’s not just demographics if people in their mid-20s to mid-50s work less than people of the same age 15 years ago.

Here’s a look at people from their mid-20s to mid-50s, and the reasons they gave for not being in the labor force in 1999 and 2014. The biggest shift has been the share of Americans who don’t work because they’re disabled or ill—this has risen among every age group, in some cases pretty sharply. In 1999, 8% of those in their early 50s cited disability. In 2014, it was 11%. This gets relatively little attention among economists, despite accounting for the biggest shift. The share taking care of their family has risen for some ages and declined for others. (There’s also been shifts within genders, that we won’t go into here). Overall, this is a wash.

Even among workers older than 25, there’s been a noticeable rise in school attendance. This largely reflects that more Americans pursue advanced degrees today than in the past. Finally, there’s been an increase in workers who want a job but aren’t in the labor force, due to discouragement or other factors. This increase is fairly modest.

The chart below shows how the share of the overall population that’s not in the labor force has changed over the past 15 years. The decline in the labor-force participation rate defies simple explanation. But that’s not the same as saying it’s unexplained. In fact, it’s just that many things have been happening at once. There are more young people who aren’t in the labor force because they’re in school. There are more retirees. There are more middle-aged people on disability.

To be sure, mysteries remain. There are 2.6 million who want a job but aren’t looking. This population, in particular, is critical to better understand. Among people staying home to care for families, many may choose to work if the U.S. had different child-care policies or more family-friendly workplaces. And there’s reason to believe some people don’t give very good answers to the questions (400,000 millennials claim to be retired, according to this data, but it seems pretty unlikely that this many people have cashed out of a startup and are living at the beach).

None of this is to say that the American economy is unbelievably great or unusually rosy. By almost any conventional labor market measurement the economy has yet to recover from a recession that started almost eight years ago. But the notion that 92 million Americans are unaccounted for, that there’s a conspiracy in these statistics, or that we have no idea what 20 million prime-age Americans are up to, just isn’t right.

Donald Trump Is Right: About 42% of Americans Are Unemployed (If You Include My 88-Year-Old Grandma)

The U.S. Stands Out on Labor-Force Participation Rates

Only About One-Third of Labor Force Dropouts Will Return