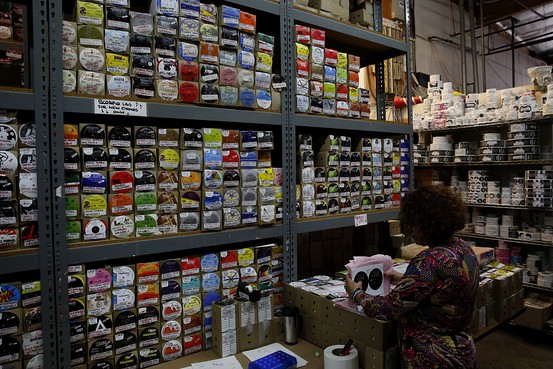 It may be a vanilla-scented LP that is keeping you from finding that Phish or Kanye record in your neighborhood store.

Record manufacturers around the country are having a tough time dealing with the revival of interest in old-fashioned LPs, mostly because they require specialized equipment people stopped building in the 1980s—equipment that has long been stripped for spare parts.

But that’s not enough: Rainbo president Steve Sheldon is trying to refurbish and install two more presses he found in Canada by next May.

One thing that is making his life more complicated is that musicians keep ordering up limited-edition, exclusive, novelty LPs that run the gamut from groovy to downright strange.

It’s not just red discs, or green ones. Colored vinyl has been a growing chunk of output for a while. And picture discs and elaborate packaging have long been big in Japan. 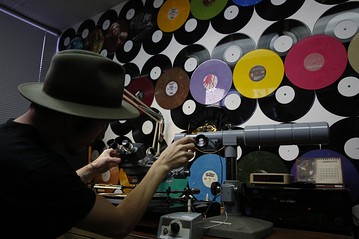 An employee demonstrates how a mother is checked for sound quality before it is duplicated during production at Rainbo Records.
Bloomberg News

What we’re talking about is tie-dyed long-players. Flourescent ones. Translucent LPs with twinkling glitter. Glow-in-the-dark. There’s even this white 12-inch “Ghostbusters” single tucked in a marshmallow-scented sleeve.

That’s right. Leaves, string, hair and blood have all been mixed in with vinyl and pressed into records.

The limit, for Mr. Sheldon, is LPs containing the ashes of people who have been cremated.

“I’ve been requested—but I haven’t done it,” says the 61-year-old, whose father-in-law invented the automatic record press in the 1960s—back when records were, you know, black.

Some music lovers will scoff at this gimmickry, and it’s possible novelty LPs just push up prices and pad Record Store Day revenues.

The more pressing issue, though, is these quirky LPs are playing a role in gumming up the record-making machinery. If a record press has pink and blue polyvinyl chloride all over it, you’re going to have to clean up before you switch to, say, yellow with glitter.

“We could do another 2,500 records a day if we didn’t do so many color variations,” Mr. Sheldon says. 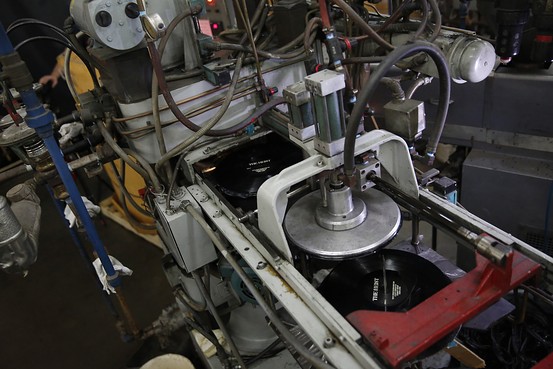 Vinyl records emerge from a press during production. “We could do another 2,500 records a day if we didn’t do so many color variations,” says Rainbo Records president Steve Sheldon.
Bloomberg News

Delayed orders and limited output could frustrate some labels and fans, hurting vinyl as it’s attempting a comeback from its 1990s near-death.

After all, many people don’t buy the idea of vinyl providing a better listening experience, despite what baby boomer audiophiles say—or don’t care. And we’ve yet to see entrepreneurs champion, capitalize and re-envision this industry, Harvard Business School professor and technology expert Ryan Raffaelli says.

Buying vinyl has the potential to be about much more than music or sound quality, since it always has been, he says. Besides the tactile advantages, young people may warm to vinyl as a social experience, whether it’s listening with friends or owning vinyl to express one’s tastes in an increasingly digital, disembodied world.

So, while oddly shaped and funny-smelling LPs may slow down production, they may be a sign producers are using their craft to turn records into something new—the millennial’s equivalent of a Swiss watch, perhaps. But cheaper.