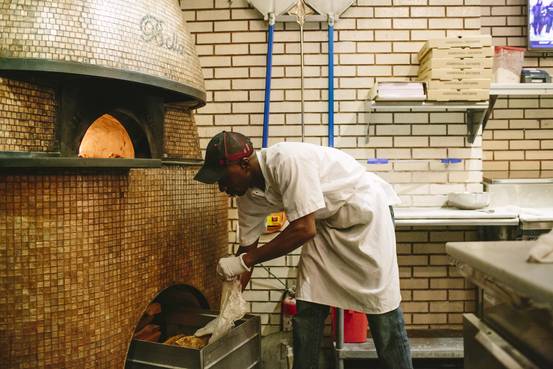 Abu Sondo, a delivery man for Pizzetteria Brunetti in Manhattan’s West Village, now also cuts wood for the pizza oven. The restaurant owner asked staff to do additional work as the minimum wage went up in January.
ADRIENNE GRUNWALD FOR THE WALL STREET JOURNAL

Hourly pay for U.S. workers leaped last month, raising hopes that the long-awaited breakout in wage growth is here, despite a slowdown in hiring in January.

Average hourly earnings increased by 0.5% to $25.39, the Labor Department said Friday. That marked the second-best one-month gain of the current expansion. From a year earlier, hourly wages are up 2.5%, a slight slowdown from the prior month’s 2.7% annual advance, but again one of the best performances since the recession ended.

But before you blow your paycheck celebrating the economy’s turnaround, there are a few things to consider.

First, the best gain for wages this expansion occurred last January. In fact, January is generally a pretty good month for pay increases. Its average gain is 3 cents higher than the average in all other months since the recession ended in June 2009. Seasonal adjustments should smooth monthly variance, but a beginning-of-the-year bump may reflect cost-of-living increases. 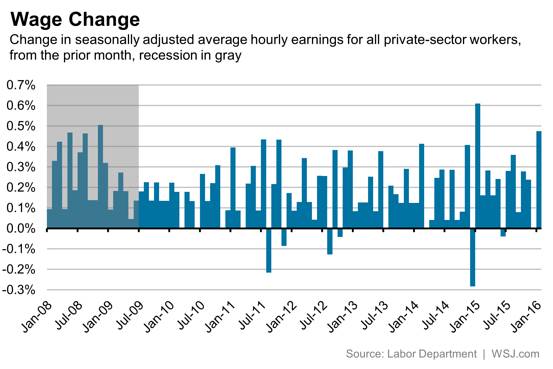 But the effect is limited.

About 4.6 million people realized an increase in their first paycheck of the year because they made below their state’s new minimum or close to it, according to the left-leaning Economic Policy Institute. No doubt that’s a welcomed boost for those workers, but it represents just 3% of the workforce. What’s more, even at $10 an hour, state minimums are well below average wages, so it’s difficult for a higher minimum wage in a handful of states to drive overall pay increases.

Third, there is some evidence that managers caused the recent gain. Hourly pay for all workers advanced 12 cents an hour last month from December. But pay for only production and nonsupervisory workers—rank-and-file Joes and Jills—increased just 6 cents last month. (The Labor Department doesn’t break out managers’ wages.)

“This means the supervisors and management, accounting for only 15% of the work force, saw a huge jump in their pay,” said Megan Greene, an economist at John Hancock. “Part of this can probably be explained by end-of-year boss bonuses being deposited in January.”

Most economists agree that one number is definitely affecting wages: a 4.9% unemployment rate in January. The unemployment rate fell last month to the lowest level since early 2008. Falling unemployment coupled with rising wages suggests diminishing slack in the labor market is causing some employers to pay more to attract workers.

“We continue to see a gradual reduction in slack in the labor market,” said Gregory Daco, an economist at Oxford Economics. “That’s the essence of the broader trend in wages….I’m careful to not make too much out of one month’s numbers.”

Last Year’s Job Growth Was Stronger Than We Thought, But Previous Years a Bit Weaker

The January Jobs Report in 12 Charts