Deciding when something can be called “Made in USA” is harder than you might think. You can thank both the Federal Trade Commission and the state of California for that. 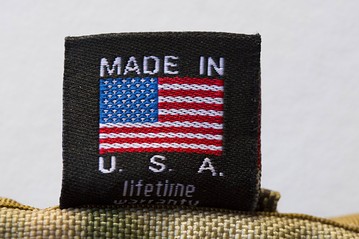 Federal law says goods that are “all or virtually all” manufactured in the U.S. qualify, though the FTC doesn’t define what “virtually all” means, leaving some wiggle room. The FTC decides on a case-by-case basis when disputes arise over use of the phrase. That can be frustrating for producers, many of whom would prefer it spelled out.

But a bigger problem is California. State law there is explicit and clashes with the federal standard: If a product contains just one imported screw or rivet, it cannot carry the label. California is the only state with such a rule.

That’s not a big problem for something simple like bath towels or plastic lawn chairs. But with more complex goods, such as electronics or machinery, it can be difficult to assure the domestic pedigree of all the raw materials and component parts. In some cases, there are no domestic suppliers or their cost is prohibitive.

Element Electronics Corp., a television company based in Eden Prairie, Minn., is just one U.S. company that’s had to wrestle with this issue. Element is trying to revive the industry at a factory in South Carolina. Its solution is to label its goods “Assembled in the USA.”

Manufacturers have tried to get California to relent. In 2011, the California assembly unanimously approved a bill to amend the law so it would harmonize with the FTC rule. But the move eventually floundered in the face of staunch opposition from consumer and trial lawyer groups.

California has become a minefield for producers like Lifetime Products Inc., a Clearfield, Utah maker of portable basketball hoops. Lifetime recently settled a class-action suit brought against it over labeling hoops that were sold at Sports Authority stores in the Golden State.

“We make everything in Utah—including our own metal tubing and the plastic parts,” says Richard Hendrickson, the company’s chief executive. The woven netting that came with the hoops in small plastic bags, however, is imported from China and ran afoul of the law.

Many companies today follow the California rule, even when they have no intention of selling there. The risk is simply too high, since complex distribution networks sometimes send goods to markets where they were not intended. In the meantime, companies including Lifetime have shifted focus to the FTC, hoping to get legislation passed that would give the federal law priority over state regulations.