Prices in the U.S. are either rising or falling, depending on how you measure them.

So why did another Labor Department inflation yardstick, the producer-price index, decline 1.1% on the year in November? The answer may be simple: Housing costs are rising faster than pretty much anything else, and they’re not part of the PPI. 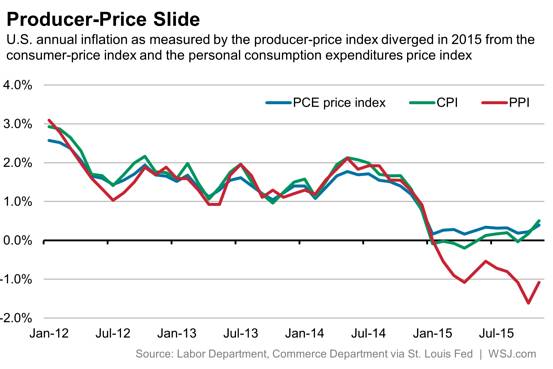 A little background first. The PPI tracks price changes at the business level, and it was overhauled two years ago to cover a broader base of goods and services. In some cases, it can reveal inflationary pressures in the pipeline before they show up in consumer prices.

It also happens to be first broad inflation gauge released each month, earning it extra attention from economists and investors. The December PPI report will be released Friday morning, while the CPI won’t be out until next Wednesday and the PCE price index won’t be available until Feb. 1.

The PPI has generally moved in tandem with the two consumer-facing price gauges, but it has diverged from both measures over the past year. All three inflation gauges fell toward zero after oil prices began to tumble in mid-2014. The PPI kept going, dropping into negative annual territory and staying there, while the CPI and PCE measures have stabilized at low levels.

The likely culprit: rising rents. The cost of shelter, as measured by the CPI, rose 3.2% in November from a year earlier for the third consecutive month—the fastest growth in eight years. But while rent (and its equivalent for homeowners) makes up nearly a third of the CPI basket and a smaller but still substantial share of the PCE index, it’s absent from the PPI. That may explain why the path for PPI looks a lot like the path of CPI if you exclude shelter costs from the latter index. 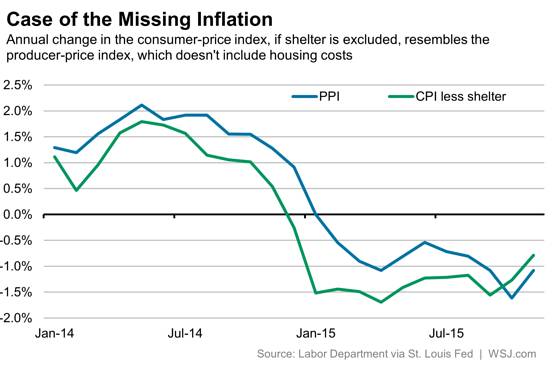 It has other quirks, too. The PPI excludes imports, limiting insight into the inflation-dampening effects of a stronger dollar. And it tends to be volatile from month to month—partly due to trade services, an erratic measure of retailer and wholesaler margins that makes up about 20% of the index.

The PPI can offer valuable insight into individual industries, such as the health-care sector. And economists are drilling down in the report to highlight a more-stable core reading that excludes trade services as well as the traditional food and energy. But caution is warranted now when it comes to drawing broad conclusions from the headline number.

Nearly Half of Renters Put Too Much Toward Rent

A Brief History of U.S. Inflation Since 1775

U.S. Wages Are Historically Great, Or They’re Awful. It Depends on Your Preferred Inflation Measure