When It Comes to Housing, Maybe Millennials Aren’t so Different After All – Real Time Economics

Millennials get flack for postponing marriage, living with parents and shying away from homeownership. But what’s less discussed is how, to some extent, they’re just responding rationally to their local housing markets. 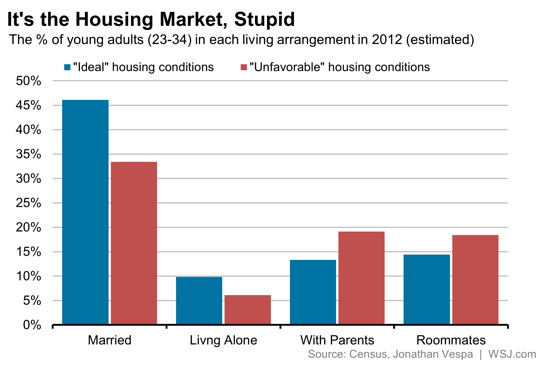 “It’s easier to move out when apartments are cheap and there are a lot of them,” Mr. Vespa says. “It’s a basic relationship we often overlook. The housing market is going to condition the types of choices young adults have about who to live with.”

To be sure, millennials are different from their elders in many important ways, whether it’s their lack of trust in social institutions, their racial diversity, their liberal attitudes about race and homosexuality, their student debts, or their preference for play-lists over rock albums.

In a separate study last week, Jed Kolko, chief economist at Trulia Inc., the online real-estate information company, argued that demographic changes, such as delaying marriage and parenthood, account for nearly all of the declines in homeownership among young adults.

But many of these demographic shifts may simply postpone home-buying, rather than eliminate it. Like mom and dad, many millennials, once they finally marry and have kids, may want that white picket-fence, too. “There probably hasn’t been a huge shift in millennials’ attitudes toward homeownership,” Mr. Kolko says.

In his study, Mr. Vespa and colleagues Charlynn Burd and Rose Kreider dug into the Census’s 2012 American Community Survey—its richest and most recent snapshot of U.S. demographic trends——and divvied up 366 metros across the U.S. into “ideal” and “unfavorable” housing environments. (The study controls for key differences between metro populations, things like race, age, college enrollment, net migration flows, foreign-born populations.)

Generally speaking, marriage and living alone are more prevalent among Americans aged 23 to 34 years old in areas with better housing conditions, while expensive housing markets are linked with living with roommates, parents, cohabiting partners, or as a “sub-family,” that is, a married couple living in someone else’s household. In a nutshell, it’s not just that millennials are different people than their parents; it’s that the vicissitudes of today’s local housing markets are also shaping their demographics.

This isn’t a purely academic issue. If the changes we associate with millennials (less marriage, delayed children, living with parents, weaker home-buying) are demographic rather than economic in nature, they will persist over time—reshaping America’s housing markets, economy and society.

If, however, millennials aren’t as different as we think—many are just now entering prime child-bearing years, and many still say they want two kids, and to buy homes—the repercussions may be less dramatic. All the more so because of how many millennials there are in the first place—which means a lot more people getting married, buying homes and having little ones.