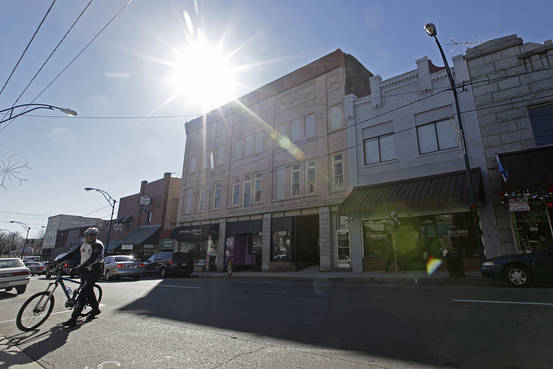 A police officer walks his bicycle across Main Street in Mount Airy, N.C., in 2011. The small town in the foothills of the Blue Ridge mountains is the hometown of Andy Griffith and the Mayberry portrayed in his television show—and is seeing a burgeoning number of millionaire households.
CHUCK BURTON/ASSOCIATED PRESS

The real-life “Mayberry” is adding millionaires at the fastest pace in the country.

As Andy Griffith’s birthplace, Mount Airy, N.C., claims to be the inspiration for the town featured in the 1960s television classic “The Andy Griffith Show”—but folks there have more than just southern charm in common the late actor. They’re also increasingly millionaires.

The Mount Airy metro area’s population of millionaire households grew by 332, or almost 30%, between June 2014 and June 2015, the quickest rate in the country, according to a report Phoenix Marketing International released Tuesday.

The annual study of where the wealthy live counts a household as a millionaire if it has more than $1 million in investable assets, which includes stocks, bonds and savings accounts but excludes the value of real estate and funds tied up in retirement accounts.

The country as a whole added 6.5 million millionaire households in the middle of last year from the middle of 2014, a growth rate of about 4%. That was the fastest clip since 2011, reflecting strong gains in the stock market during the period studied for the report.

Mayberry—er, Mount Airy—still features a real Floyd’s Barber Shop, along with Opie’s Candy Store, Barney’s Café and the Andy Griffith Museum. But it isn’t a town swamped with millionaires.

Just 3.8% of households have a million dollars or more in assets, below the national average of 5.4%. But its impressive growth of high-net-worth families likely reflects that well-off retirees are moving there in search of quintessential small-town life, said Randy Collins, Chamber of Commerce president.

“We have a small-town feel, right next to the mountains…and coffee only costs a dollar at the cafe,” he said. “But we’re not so far out in the sticks that you need to leave a trail of bread crumbs.”

Mount Airy attracts retirees and older workers from nearby larger cities such as Winston-Salem and Raleigh, N.C., areas that have had strong economies due to research universities, technology companies and a growing health-care sector.

Affordable housing and low prices in local stores are among the biggest draws for the town, Mr. Collins said. “I don’t know many people that became millionaires by spending everything they have.”

Among states, North Dakota recorded the fastest growth in millionaires in June 2015 from a year earlier, increasing more than 10%. The growth reflects rising wealth tied to the oil industry, which has slowed sharply in the past six months.

The report from Phoenix, which provides data to wealth managers and other financial services companies, found that for the first time, more than one million U.S. households had a net worth of more than $5 million in 2015. That group increased by 5%.

“Growth in that market, essentially the 1%, has been impressive,” said David Thompson, managing director of the firm’s affluent practice.

Of course, markets haven’t exactly kicked off strongly this year.

“It’s a milestone, but we’ll see what this year brings,” Mr. Thompson said.

The metro area with the most millionaires was New York, which added more than 10,000 over the 12-month period, for a total of almost 480,000 households.

Los Alamos, N.M., was again the area with the highest concentration of wealthy households. About one in eight households there have more than $1 million in assets. Los Alamos has a small population and an economy dominated by relatively well-paid scientists and researchers at the Los Alamos National Laboratory.

Unemployment Fell in Many Texas Cities, Despite the Oil Bust