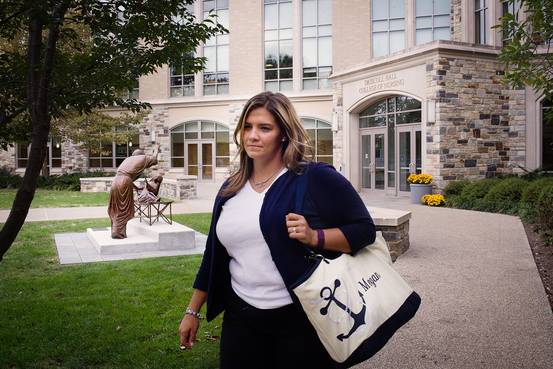 Villanova University nursing student Megan Goodman, who earned her associate’s degree in May, has enrolled in a higher degree program to improve her odds of getting a job.
DARYL PEVETO FOR THE WALL STREET JOURNAL

Companies shamelessly ratcheted up their requirements during the recession, when hundreds of thousands of college graduates were out of work. At the same time, as research by David Autor of the Massachusetts Institute of Technology and others have shown, the broader labor market has become more polarized, with fewer middle-skill jobs available for those without a college degree.

There are industries that have genuinely evolved, with more roles for people with analytical and problem-solving skills. In health care, for example, regulatory change requiring the digitization of health records has led to greater demand for medical records technicians. Technological change in the manufacturing industry has reduced routine factory jobs while demanding more skilled workers who can operate complex machinery.

But employers’ expectations can also ebb and flow with the state of the labor market. Beginning in 2007, firms posting job listings in a variety of industries began requesting bachelor’s degrees or multiple years of experience where previously neither was required. Alicia Sasser Modestino, an economist at Northeastern University, calls this cyclical phenomenon, in which an increase in the unemployment rate leads to higher expectations for new hires, “opportunistic upskilling.”

Ms. Modestino and her co-authors studied approximately 13 million job listings from the online job aggregator Burning Glass Technologies and found that increases in a state’s unemployment rate caused local employers to raise the requirements for middle-skill jobs, such as administrative assistant or sales representative. They found that for each percentage-point increase in the state unemployment rate between 2007 and 2010, the share of jobs requiring a bachelor’s degree rose by 0.44 percentage points. Similarly, the share of jobs requiring at least two years of experience rose by 0.79 percentage points. That correlation held steady even when the researchers were looking at the same job title at the same firm. Other examples of middle-skill jobs that were affected include paralegal, logistician (someone who works at a warehouse or distribution center, for example), aircraft mechanic, customer-service representative and construction manager.

Now, with the unemployment rate at 5.1% nationally, that trend has reversed–but only slightly.

The same researchers looked at a similar data set, this time roughly five times as large, for 2010 through 2014 and found evidence of downskilling, although to a lesser extent. Over this period, a percentage-point decrease in the unemployment correlated to a 0.2-percentage point decrease in the share of jobs requiring a bachelor’s degree, and a 0.22-percentage-point fall in the share of jobs requiring at least five years of experience.

“In the recession, you could go out and get the most skilled workers, really dynamite candidates, who were job-ready from Day One,” said Ms. Modestino. “Now, if [employers] have to pay a premium to have a bachelor’s degree, if they’re not willing pay that premium, we see them reversing their skill requirements.”

That hasn’t stopped some employers from aiming high. A 2014 report by Burning Glass Technologies found that the majority of job postings for occupations like executive assistant or insurance claims clerk now list a bachelor’s degree as a requirement, even though only 20% of people currently in those occupations have one. This “credentials gap” has made these jobs harder to fill, but raises the question of whether the much-lamented “skills gap” is real.

The Best Person for the Job? Think Again