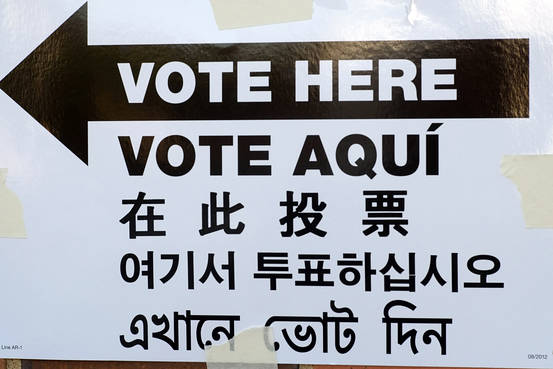 Here are two claims you’ve probably heard recently about the effects of immigration in the U.S.:

The two claims contradict each other, or at least push in opposite directions. People may have some intuition about which effect is more powerful, but now a trio of economists has mined demographic data from the U.S. Census Bureau to figure out which effect is, in fact, the bigger one.

“Noncitizen/undocumented immigrants are both the enemy and the raison d’être of some politicians,” wrote Anna Maria Mayda of Georgetown University, Giovanni Peri at the University of California, Davis,  and Walter Steingress at the Bank of France. Their research was published this week as a working paper by the National Bureau of Economic Research.

First, the authors find that both effects do happen. Immigrants who become voting citizens really are more likely to support Democrats, while rising immigration really does cause native voters to more heavily favor Republicans.

Second, it turns out that neither effect automatically trumps the other. In fact, the key takeaway of the research is that increasing immigration would, on net, boost Democrats in 353 districts. It would only boost Republicans in 55 districts. The districts in which Republicans are boosted makes this a much more complicated story than you might think. For the most part, it’s districts with a lot of immigration that make voters more likely to vote Republican.

As the authors note, “The political returns to talking tough on migration share has a positive impact on Republicans’ political success only when this share is high, which presumably makes the topic of migration salient in voters’ minds or increases the concern of citizens.”

Or, in other words, a little bit of immigration helps Democrats by giving them new voters, but a lot of it helps Republicans by driving native voters’ worries. The researchers note that in some European countries, for example, immigration has become a clear positive for conservative parties, rather than for liberal ones.

The authors present a more nuanced picture of immigration than is typical among politicians. (Mr. Peri has also conducted research suggesting that immigrants, especially with STEM educations, boost the wages of other highly educated workers rather than forcing them down, suggesting the political implications of high-skilled immigration could be quite a bit different than low-skilled immigration.)  Their findings don’t present a very clear roadmap for either party.

New Evidence on Immigrants and Jobs