Two government initiatives seeking to understand the value of a college education are about to butt heads.

The White House spelled out a plan Friday to rank the nation’s 5,000 colleges and universities, reasoning that students need more information before committing to the hefty expense of higher education. At the same time, and with much less fanfare, the U.S. Census Bureau has proposed ending its efforts to collect data on college majors.

“It feels like the left hand doesn’t know what the right hand is doing,” said Anthony Carnevale, the director of Georgetown University’s Center on Education and the Workforce, who uses the Census Bureau’s American Community Survey data for research on the value of different college degrees. 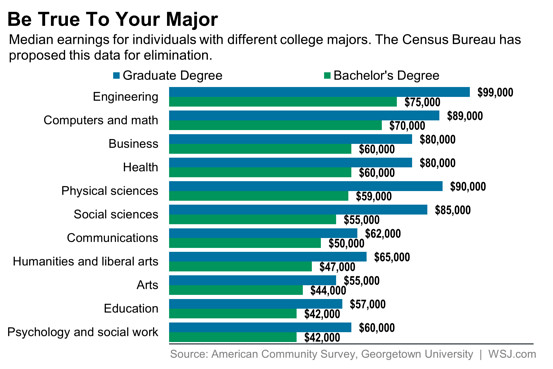 The Census proposed removing seven sets of data from the ACS. In addition to ceasing data collection on college majors, the Census would drop five questions about people’s marital status, and one housing question from their survey. While seven questions are currently being considered for elimination, 17 more have been identified by Census as “low-benefit” and in need of further scrutiny.

The White House, meanwhile, has released a draft framework to rate schools on graduation and retention rates, the ability of graduates to pay back student loans, and whether schools include low-income and first-generation students. This initiative, run out of the Department of Education, would not rely on ACS data. But both the Census data and the Department of Education data speak directly to the same question: how valuable is a college education?

To many researchers, the ACS is among the world’s statistical marvels: a 125-question survey of 3.5 million U.S. households a year that provides a robust understanding of demographic, social and economic trends. The survey produces statistics for geographical areas as small as neighborhoods. To statisticians, the ACS imparts a sense of awe and national importance similar to what the Golden Gate Bridge or Hoover Dam do for infrastructure buffs.

When it comes to statistics, “the key respect in which we’re better off than other countries is the American Community Survey,” said Andrew Reamer, a professor at George Washington University, and an adviser to many data gathering agencies. “There’s a lack of recognition that the statistical system really is vital infrastructure that enables the economy and government to make intelligent decisions.”

People are increasingly reluctant to take most surveys. The Pew Research Center and Gallup, two of the most careful polling organizations around, reported response rates to their surveys of around 10% in 2012. But the ACS is mandatory. If you don’t fill it out, Census workers can track you down, even in person if necessary, to get responses. In 2012, the ACS had a response rate of 97.3%. (The Census has authority to fine people for not responding, but in practice does not actually issue fines.)

Mandatory response is the source of both statistical strength and political weakness. In 2012, House Republicans passed a measure to cut ACS funding, calling it “intrusive and costly.” The decennial census itself is required by the U.S. Constitution, but some argue that because it goes beyond an “actual enumeration” of the population, the ACS is an invasion of privacy. The House measure went nowhere in the Senate, but raised alarms at the Census, which launched a content review in 2013.

“I think that they wanted to be able to show they were making severe cuts,” said Steven Ruggles, a member of Census’s Scientific Advisory Committee and director of the Minnesota Population Center. He recently used ACS data in research questioning whether the U.S. divorce rate is falling. (Not all agree with Mr. Ruggles and his coauthor Sheela Kennedy‘s conclusion.)

Laws often stipulate that federal government funding be disbursed according to statistics from the ACS, and such mandated uses will be retained. Questions that government agencies rely on, even if not required to do so, were also spared the ax. But the calculus ignored whether researchers used the data, leading to the conclusion that data on college majors and marital status was “low-benefit.”

The decision is not yet final. The Census has received over 400 public comments on the proposed cuts, according to a spokeswoman. In a report posted on its website, the Census said it will “consider inputs from other data users and stakeholders” before submitting its final recommendations to the White House. The questions could be eliminated as soon as 2016.

The Census, however, has indicated it may not be done trimming the survey. “Questions that scored low on benefits” the Census report said, “should be more closely examined.”

Under that microscope are an additional 17 questions not currently proposed for elimination. Other low value questions include data on how many vehicles households have, what fuel source houses use, whether the household received food stamp benefits or has disabilities due to military service. Questions about the grade level of children, whether grandparents care for children, and whether people in the household have moved in the past year are also considered “low-benefit.”

Update: A previous version of the chart showed earnings of $62,000 and $50,000 for “Communications” graduates under the category, “Health.”