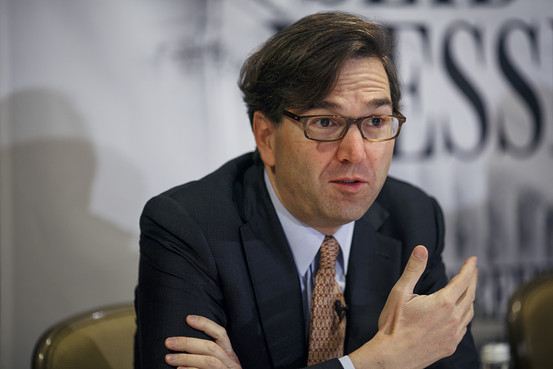 Jason Furman, shown in 2013, didn’t take sides in the Bernanke-Summers debate in a speech Wednesday.
MELISSA GOLDEN FOR THE WALL STREET JOURNAL

Jason Furman, the chairman of the White House Council of Economic Advisers, didn’t take sides in his speech at the Brookings Institution on Wednesday. (In a speech last month, however, he did weigh in when he said secular stagnation wasn’t an issue for the U.S. economy this year.)

Instead, Mr. Furman said Wednesday that regardless of which camp has it right, trade would offer enough economic benefits to help address either concern. Mr. Obama wants Congress to authorize “fast track” authority, which subjects trade deals to an up-or-down vote without amendments, in order to finalize a major trade agreement known as the Trans-Pacific Partnership with 11 other countries later this year.

To address the concern of secular stagnation raised by Mr. Summers, trade would boost productivity growth by expanding the range of investment opportunities through agreements such as the Trans-Pacific Partnership.

And if global imbalances are the problem—Mr. Bernanke suggests that an uneven global allocation of savings and investment have threatened the sustainability of economic growth—then trade deals would “seek a level competitive playing field for global trade to help resolve such imbalances,” he said.

Mr. Furman said the debate over secular stagnation has helped to understand the recession and the recovery that the country has just gone through, but that it doesn’t address the future of productivity growth in the economy, which he said is “the most important economic question” facing the nation.

Greg Ip: The Fed Turns Gloomier on the Supply Side

A Whiff of Secular Stagnation in Budget Forecasts