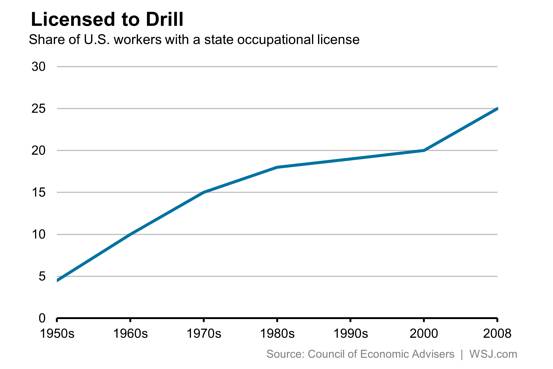 Economic policy makers at the White House spent much of the last six years putting out fires sparked by the financial crisis and recession. Now, they are turning to seemingly mundane matters that are part of a bigger problem: How to fix American labor markets that have grown less dynamic.

A White House report released this week offers a good example. Economists and other policy hands are concerned over the patchwork of job licensing requirements they say could be hazardous for the labor market.

Around one in four workers are now required to have a license to do their jobs, up from one in 20 in the 1950s. The report attributes about two-thirds of the growth to an increase in the number of professions that require licenses—not just barbers and hairdressers, but auctioneers, florists and scrap-metal recyclers. The other third comes from the changing composition of the workforce.

The report suggests licensing requirements could contribute to a labor market that is less dynamic because workers face greater challenges in relocating across state lines. It cites estimates that more than 1,100 occupations are regulated in at least one state, even though fewer than 60 jobs are regulated in all 50 states.

Landscapers, for example, need licenses in 10 states, some of which require years of experience and education. “The job is the same across the country but getting the job is a very different process,” Mr. Zients said. “Discrepancies like these make it harder to go where the jobs are.”

Economists compared migration rates for workers in the most-licensed occupations with those in other fields of work. While there were modest differences between the likelihoods that the two groups would move within one state, they found substantial differences in interstate mobility, with migration rates for the most-licensed occupations lower by about 14%. The gap between mobility rates was even more pronounced for younger workers who are just beginning their careers. 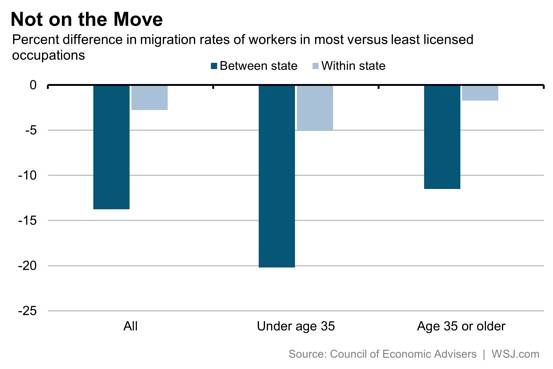 Of course, “Reform Occupational Licensing Regulations Now” isn’t likely to be a buzzy bumper sticker with the political resonance of minimum-wage increases or tax cuts. But the White House says it plans to focus on more of these types of longstanding challenges facing labor markets now that the scars of the last recession are fading.

Economists say the costs of licensing fall particularly hard on three groups of workers: military spouses who frequently move across state lines, immigrants who have deep knowledge and training but can find themselves shut out of those fields, and workers with criminal convictions. The report recommends that licensing requirements consider whether a criminal record is relevant to the license and how long ago it occurred.

Short of pre-empting state law, the White House has little direct say over what states do. President Barack Obama’s budget proposal in February included $15 million to study the impact of occupational licensing, and White House advisers say they hope the report can encourage legislatures to rethink licensing requirements by taking several steps.

First, it recommends limiting licensing requirements to those that address public health and safety concerns. Moreover, states should implement cost-benefit assessments of licensing standards while creating sunset provisions that force periodic reevaluations of whether certain standards are still needed.

The report says that removing licensing requirements tends to be more difficult than enacting them, in part because licensed workers have strong incentives to prevent any rollback in rules that make their licenses less valuable.

“It’s basic political science to understand why it can be really difficult because once you have people licensed, you can identify who is the protected group of people and they obviously benefit when people are kept out of their profession,” said Betsey Stevenson, a labor economist and member of the Council of Economic Advisers. “It’s harder to identify who is hurt.”

State Licensing Boards Under Fire From Within

Think Tank: In Obama’s Budget, an Effort to Rein in Occupational Licensing

Commentary: How to Deregulate Cities and States