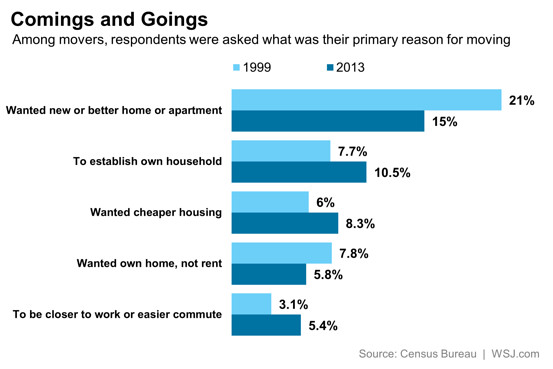 More Americans who moved between last year did so to secure cheaper housing or a shorter commute, compared to 1999, when more movers sought to upgrade their home or apartment, according to a U.S. Census Bureau report released Thursday.

Housing continues to be the main reason Americans move, with 48% citing housing-related drivers, followed by family-related reasons, at 30%. Some 19% of movers said they moved primarily due to work. The relative importance of those drivers hasn’t changed over time, according to a separate Census survey.

But the report found that movers had different motivations for changing housing than they had in the past. Improving their housing or owning a home was less important last year than in 1999, for example. Some 15% of movers cited their desire to find a new or better home or apartment as their main reason for moving last year, down from 21% in 1999. Just 5.8% of movers relocated because they wanted to own their home, rather than rent, down from 7.8% in 1999.

Some 1.8% of movers cited a foreclosure or eviction as the top reason for moving; the report didn’t provide a comparison to 1999 for that category. The U.S. homeownership rate stood at 65.2% at the end of 2013, down from 66.9% at the end of 1999, largely the result of the housing boom and bust that has resulted in millions of foreclosures since 2007.

Job-related reasons are the most common reasons that Americans made long-distance moves, with 48% of moves 500 miles or more happening due to a change in employment, compared to 22.7% of moves of less than 50 miles. Just 18% of those who made long-distance moves cited housing as a primary driver, compared to 41.5% of those who moved shorter distances.

Relatively few Americans—less than 1% in each category—cited health reasons or their desire for a change in climate as their main reason for moving.

The Census survey asks respondents to select the reason that contributed most to their reason to move. “Picking one reason can be difficult as moves are often motivated by many different, and oftentimes competing, factors,” said David Ihrke, a demographer at the Census Bureau who authored the report.