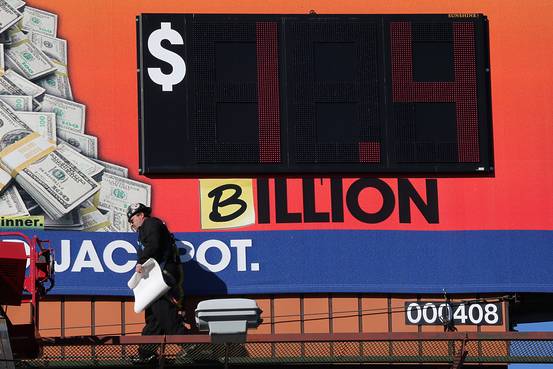 Greg Ip paid $2 to join the office Powerball lottery pool and asks: Why? Because it wasn’t the $1.5 billion.
BEN GRAY/ATLANTA JOURNAL-CONSTITUTION VIA AP

When it comes to financial decisions, I pride myself on being ruthlessly rational: I don’t gamble, I don’t purchase extended warranties, I allocate stocks in my 401 (k) according to their expected return over bonds. I am what behavioral economist Richard Thaler would call an “econ,” not a human.

But Monday I did something an econ should not do: I paid $2 to join the office Powerball lottery pool, though I know my odds of winning are statistically no different from not buying a ticket.  I asked Twitter, “What part of behavioral economics explains why I buy a ticket to a lottery I know I won’t win?”

The answers provided an entertaining foray into behavioral economics, though it took a while before I found one that rang true for me:

He’s referring to the leadoff sentences from a legendary unpublished article by Harvard University economist Larry Summers explaining why financial markets deviate from fundamental value. OK, I acknowledge that in many matters (football, cars), I’m an idiot. Except that in matters of lotteries, I’m not. I understand probability, I know that the expected payoff (the odds of winning multiplied by the prize) of a lottery is less than the price of playing (with some wrinkles, as Marginal Revolution’s Alex Tabarrok explains).

Budget wonk Michael Linden said , “The pleasure you derive from the resulting daydreams is worth at least $2.”  Matt Levine of Bloomberg View agreed: “Come on now. What is the disutility of spending $2, for you? What is the utility of winning? Of thinking about winning?”

“Utility” is economist-speak for the benefit derived from a transaction; disutility is the harm. Does the warm fuzzy feelings from thinking about how I’ll spend the wealth make the price of the ticket worthwhile? I don’t think so. This would require that I actually have some expectation—however small—of winning. But I don’t. I am more likely to be killed by a terrorist before the next Powerball drawing, than I am to win. OK, I just made this statistic up, but rather than check it out, I behave as if it’s true, an example of  “rational inattention.”

CNBC producer Alex Rosenberg suggested it’s the “value of potential connections forged by talking about what you’d each do with the money > the $1ish lost in expected value.”

I derive utility (“fun”) from talking with my colleagues about the lottery much as I do from talking about Donald Trump’s presidential bid or the Oscars, even though talking doesn’t affect the outcome. For the same reason, to some people the fun of going to a casino with their friends outweighs the expected loss from gambling. The problem with this theory is that I would have just as much fun talking about the lottery without buying a ticket.

My colleague Charles Forelle said: “Surely if the marginal utility of money is concave, the marginal satisfaction of fantasy is convex.”

This is an economist’s way of saying that each additional dollar yields less satisfaction than the last. For example, my first Starbucks coffee yields me great pleasure, the second somewhat less, the third none at all. At a grander scale, the first million I earn will be life-transforming,  the second million, less so. So why play lotteries? Charles’ second statement, that the “marginal satisfaction of fantasy is convex,” means that as fantasies become more outlandish, they become even more enjoyable. It’s a thousand times more fun to fantasize about what I’d do with $1 billion than with $10 million.

But I don’t think this is true. At a certain point all fantasies become equally ridiculous and thus equally enjoyable. I mean, with $300 billion I could buy ExxonMobil. But what would I do with it?

Mr. Gayer is citing the prospect theory of Nobel laureate Daniel Kahneman and late collaborator Amos Tversky, according to which people make decisions based on gut, rules of thumb and familiar reference points rather than objective criteria. People put higher odds on events that they can visualize—dying in a terrorist attack or buying a vacation home with one’s lottery winnings—than more abstract events. But since I haven’t spent a moment visualizing what I will do with my Powerball winnings, I don’t think this is true for me.

Perhaps I like to take risks, unlike most people who are risk averse.  Ask them to choose between $1 or a trying for a $2 prize by flipping a coin heads, and they will choose the first, though the two choices have the same expected value (50% probability of $2 equals $1 expected value).

But some people like risk and will take the coin flip. Such people give us extreme sports, technology startups and financial crises. Not me, though: On my last visit to a casino I didn’t spend a penny and my idea of extreme sports is rushing the trash can to the curb as the garbage truck pulls up. I’m risk-averse.

My colleague Nick Timiraos wondered,  “Fear of missing out?”And the New Yorker’s John Cassidy suggested: “Warped loss aversion? Worth $2 to avoid the feeling that you passed on (a tiny) chance of winning $1 billion?”

“Loss aversion” refers to the fact that people feel pain more acutely than pleasure. The disutility from a dollar lost exceeds the utility of a dollar gained.

Just before I bought that lottery ticket, I wasn’t imagining all the wonderful things I would do with my share of $1.5 billion. Rather, I was imagining everyone in my office sharing in the $1.5 billion—except me, because like a stubborn econ I had refused to buy a ticket. My bureau chief Jerry Seib bought a ticket because, he admitted, he couldn’t bear explaining to his spouse why he wasn’t sharing in the winnings.

Being able to visualize the agony of not winning, but not the joy of winning, must be a form of loss aversion. Peer effects are clearly at work. If the choice were whether to buy a ticket by myself, I would have said no. If someone I knew won, I’d endure my penury in blissful anonymity. But to do so with the full knowledge of all my colleagues?

How to Guarantee Yourself the Jackpot in the Biggest Lottery Ever—In Theory, Anyway

Should You Play the Lottery?

Lottery Lift? States Hope for Their Own Powerball Jackpots