Why Are Jobless Claims Falling So Fast? – Real Time Economics 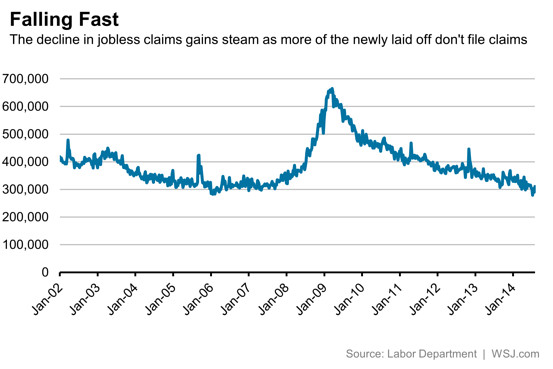 The number of people filing new claims for unemployment benefits fell last week to 298,000, marking the third time in the last five weeks they have fallen below the 300,000 level.

The last time claims were so low was in early 2000 and 2006, at the height of previous economic expansions. Jobless claims, a proxy for layoffs, are also near record lows when population growth is taken into account.

Yet the improvement seems out of step with other labor-market indicators. The nation’s unemployment rate was 6.2% in July, a historically elevated rate for this point in the recovery, and many economists believe even that gauge overstates the true health of the job market. The jobless rate doesn’t capture, for example, discouraged workers who have given up their job searches.

Economists believe that one reason for a lower rate of layoffs is a labor market that has become generally less dynamic over the last few decades.

Employers have become less likely to lay off workers over time, though they have also grown more cautious about hiring. Similarly, workers have grown more reluctant to change jobs, possibly stunting career development and earnings growth as a result.

But more recently, most of the fall in jobless claims has been driven by a decline in the number of the newly laid off who don’t bother to apply for government benefits in a generally improving economy.

Layoffs, as measured by the Labor Department in its monthly Job Openings and Labor Turnover survey of U.S. employers, have been fairly stable after falling sharply in 2010 and early 2011. But benefit claims registered with state employment agencies have continued to fall steadily since then.

Based on historical experience, the number of people who lose their jobs and then apply for benefits should continue to fall as the average duration of unemployment declines and as laid off workers become more optimistic about their chances of quickly finding a new job. JPMorgan Chase economist Michael Feroli calculates that the so-called take-up rate has fallen to around 85% from 100% during and shortly after the recession. He notes that the rate fell to 75% during the last expansion, implying it has further to fall this time around.

“Weekly claims should drift further to around 275,000, an outcome we expect to see entrenched by around the end of the year,” Mr. Feroli said in a recent note to clients.