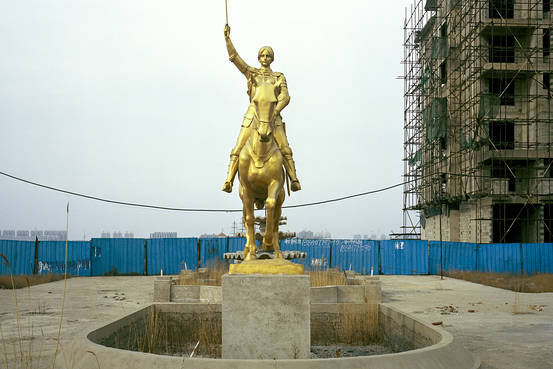 In Yingkou, in northeast China, a developer started work on his version of Spanish villas and surrounded the project with statues of Greek gods and a golden Joan of Arc on a horse.
TIM FRANCO FOR THE WALL STREET JOURNAL

Living in China can be maddening–the crowds, the pollution, the insufferable officials–but always illuminating.  Small hints from daily life can give you an idea about the future of the world’s second-largest economy. Is all that construction a sign of strength or weakness? Does China really lack a service sector when workers are happy to come your apartment after midnight?

Below is an excerpt from a new Wall Street Journal book, “Beijing from A to Z,” by veteran Journal reporter Bob Davis and his journalist wife Debra Bruno, who lived in China for more than three years. It’s the brainchild of The Wall Street Journal’s Expat. The book is free to subscribers. It’s a collection of personal reminiscences, organized by letters of the alphabet, which tells how one family learned about life in the Middle Kingdom.

One of the pleasures of living in China, as opposed to just visiting the place, is getting to see more than just China’s most impressive cities. Think of visiting the U.S. and stopping only at New York City and Los Angeles. What could you learn about the tapestry of American life from seeing just a few patches, even vivid ones?

China divides its 600 cities into four tiers. Only four cities are classified as first-tier─Beijing, Shanghai, Guangzhou and Shenzhen. (For these purposes, Hong Kong is treated like a separate country.) There are about two dozen second-tier cities, depending on who is doing the counting, and nearly all are provincial capitals. All the rest, including 200 cities with populations of more than one million, are categorized as either third- or fourth-tier.

Those 200 are where you see the future of China, for better or worse. They are the parts of the country where farmers are buying their first urban apartments and making the slow climb into the middle class. They are also the parts of the country that are vastly overbuilt and running up huge debts that threaten the country’s economic future. Nearly every third- and fourth-tier city I visited was ringed by empty apartment towers that are visible at night only by the blinking red lights on their top floors. WSJ+ Download: Beijing from A to Z: An Expat Couple’s Adventures in China

Visiting such cities gives you a sense of China’s vast scale and diversity─and funkiness. Wenzhou, an entrepreneurial center of 1.9 million in east China, has a replica of the Arc de Triomphe in a part of the city developers call “Europe.” It’s the part of town to find restaurants that serve pasta.

In Yingkou, in northeast China, a developer had started work on his version of Spanish villas and surrounded the project with statues of Greek gods and a golden Joan of Arc on a horse. Why? Hard to know. The project appeared to be abandoned and there was no one to ask.

Want a sense of China’s diversity? About 10 miles from downtown Chongqing, a city of 30 million people, I went with a Chinese translator to talk to farmers about a local land-reform experiment. The translator couldn’t understand many of the local farmers whose dialect was so different from Mandarin that it could have been a different language.

Using hand signals, we made it to a nearby village where we met a Mandarin speaker, who turned out to be a local Communist Party official who wanted to promote the land program. We spent two hours discussing the program with him and some farmers who knew enough Mandarin to get by. The conversation went like this:

Party official: “The reforms are helping life here. Farmers are being well paid for their land.”

Various farmers: “Tell them the truth!”

Party official: “We have nothing to hide.”

Farmers: “We get nothing for our land.”

As they talked, the farmers ate peanuts and sipped bowls of baijiu, clear liquor that combines the punch of tequila and the barf-inducing power of ipecac. I ate the peanuts and passed on the baijiu.

Want a sense of China’s scale? Visit Tongling, an ancient copper-mining city on the Yangtze River. Tongling has been a commercial center for centuries; it has a population of 700,000, roughly the size of Detroit, but no airport. The quickest way to get to Tongling is to fly to Hefei—another obscure city, but with 1.7 million people—and then rent a car for a three-hour ride. China is in the midst of an airport building spree, but there are many third- and fourth-tier cities without commercial runways.

Want a sense of how Beijing’s directives are being carried out? Go to Kaili, population 600,000, in rural Guizhou province, where Communist Party chief Xi Jinping’s anticorruption drive was in full swing. Local prison authorities there hit on a fresh idea: Open the doors of the prison to local party cadres, so they could see what happened to those who break the law. It was a Chinese version of the antigang program “Scared Straight.”

Foreigners weren’t allowed in, but locals described their prison tours. The climax was a show featuring inmates in striped gray-and-white prison uniforms who sang and danced about their crimes. Some of the prisoners played drums; others, the traditional Chinese erhu, a kind of two-string violin. Some sang about their regrets and how much they missed their families.

One Kaili government official from a local hospital told me that many in the audience wept. “We’ve had experiences similar” to those in jail, the official said. “Now they have to spend their lives in prison.”

Want to see why China’s economy needs to change? Smaller cities provide big clues. Local officials often figure that what makes sense for Shanghai and Beijing would make sense in their cities, too. Not true. Shanghai built its thriving, skyscraper-laden commercial district, called Pudong, well ahead of demand, in a Chinese version of “Build it and they will come.” But take the same idea and apply it to cities with no particular commercial advantage and you get something like Yingkou, a coastal city of 2.4 million in China’s rust-belt northeast region.

I searched for the best metaphor for the view outside my hotel room, where empty apartment towers filled the horizon and few cars drove by. Did it look more like an enormous Hollywood set, or a neutron-bomb detonation that left buildings standing but vaporized all the people? Later, I stopped by one of Yingkou’s Kentucky Fried Chicken restaurants where some Yingkou residents met once a week to practice their English. They were tickled to talk to a foreigner and had all the time in the world for me.

Smaller-town hospitality was another reason I liked traveling to lower-tier places. One young man brooded about his recent apartment purchase. “I should have bought a house in Australia,” he said. Then he passed me a bucket of chicken.