Why Emerging Markets Are Melting Down, and Why It Matters, in 10 Charts – Real Time Economics 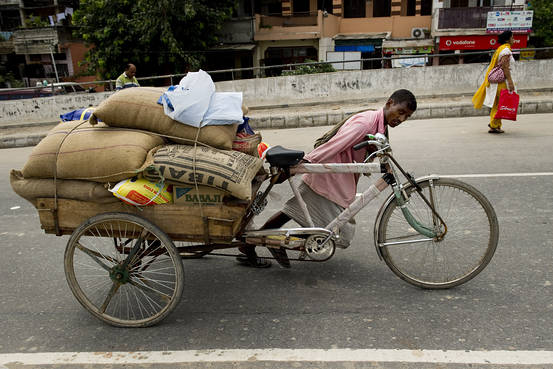 An Indian rickshaw driver pushes a heavy cart up an incline in New Delhi. World Bank economists say 2016 could be a hard slog for emerging-market countries.
MANPREET ROMANA/AFP/GETTY IMAGES

Emerging markets face one of their most challenging years since the financial crisis. Here’s why, and why it matters, in 10 charts.

Economists, including at the International Monetary Fund and the World Bank, have had to slash their forecasts for emerging markets over the last several years. 2. The Pain Isn’t All the Same

Some countries have faced bigger downgrades than others, for example, Russia, Brazil and China. And governments didn’t take advantage of the good times and cheap debt to overhaul their economies in ways that would make them more competitive and boost their capacity to grow. Growth from efficiency gains, called “total factor productivity,” is shrinking in emerging markets: Part of the problem is that the labor force isn’t growing as quickly, or in China’s case, is shrinking. Beijing’s one-child policy, for example, means there’s a wave of older workers retiring with not enough younger workers to replace them. Other emerging markets are also aging fast. Besides building major unfunded welfare liabilities over the long term, it also crimps growth potential in the medium term. Like rich countries, developing nations face a dwindling labor force: “Institution building and reform has not kept pace with GDP growth and the resulting discrepancy will make it challenging for many [emerging markets] to overcome problems associated with premature aging,” the Institute of International Finance said.

One of the biggest problems is debt. Emerging markets gorged on cheap debt amid the easy-money era. Now they are facing the consequences. At nearly 200% of GDP, emerging market debt is hitting record levels: And despite repeated warnings of the rising dangers of debt levels, some are continuing to borrow. The amount of credit Chinese nonfinancial firms owe, for example, increased by roughly seven percentage points of GDP between the end of 2014 and the middle of last year: But borrowing was based on much higher growth projections. As prospects dim, borrowing costs rise and the dollar strengthens, swelling debt levels threaten to create a host of problems. Economists predict a coming bout of corporate defaults that may hit the financial sector, burden state balance sheets and crimp lending vital to spur growth.

Emerging markets, by and large, are better prepared than they were in the Latin America and Asian crises of past decades. Many have allowed their currencies to depreciate, which acts as a shock absorber against major market volatility. Many have also built up large foreign currency reserves that can also cushion against shocks. Some have also have mixed their borrowing in both local and foreign currencies so their exposures to fluctuating exchange rates may be more limited than in the past.

Some economists also point out that many of the largest corporate emerging-market borrowers derive a significant revenue stream in dollars and have also hedged their exposures in financial markets.

But even if a major financial meltdown is avoided, those debt levels are likely to weigh on growth in much the same way mountainous debt burdens currently depress growth in Europe and Japan.

“Combined with already high debt levels, diminishing returns on debt reinforce the constraints on future [emerging market] growth: many [emerging-market] corporations will find it difficult to incur new debt, while much more debt is needed to generate the same volume of growth,” the financial industry group said.

8. Running Out of Ammunition

Authorities have a dwindling policy arsenal to stimulate growth. Before the financial crisis, emerging markets on average ran budget surpluses. But now, they have dug themselves into an average deficit worth 4% of gross domestic product and there’s less room to cut interest rates: Emerging markets make up a much larger share of the global economy than in decades past. The major developing nations—Brazil, Russia, India, China and South Africa, or BRICS—alone account for roughly 25% of gross global product, up from around 8% at the turn of the century. “This suggests a substantial risk of contagion through other emerging markets, with potential adverse effects for some advanced economies as well,” the World Bank warned.

But that’s not all. If borrowing costs for emerging markets spike, the spillovers could be larger. The World Bank estimates the global effects of both a slowdown in the BRICS and financial stress: