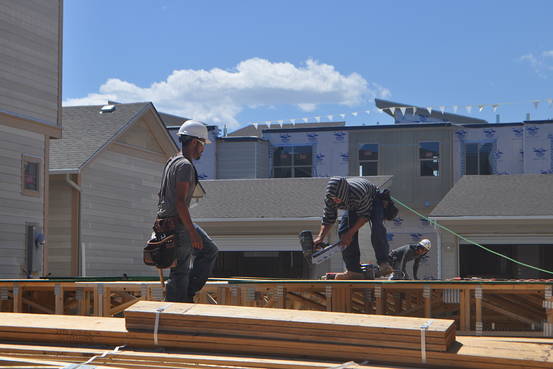 Crews build the floor of a home under construction in Denver’s Stapleton neighborhood in August.
KRIS HUDSON/THE WALL STREET JOURNAL

Rather, Realtors and builders are at odds on the fundamental question of whether it’s a supply problem or a demand problem.

The Realtor association’s chief economist, Lawrence Yun, says it’s a supply shortfall. He argues that builders “are just not robustly getting back into the game” by picking up their pace of construction.

David Crowe, chief economist of the National Association of Home Builders, counters that builders would churn out more houses if there was sufficient demand to warrant it. “Supply is an issue; that is true,” he said. “But the dominant issue still is demand. That’s the reason builders aren’t building more homes.”

The debate was rekindled this week when the Realtor association on Wednesday released its second annual study comparing the pace of home construction with that of job creation. The association’s researchers determined that, since 1990, the 146 metro areas it studied generated an average of 1.2 new jobs for each residential building permit (for both single-family homes and multifamily units).

However, of late, the ratios have skewed higher. The Realtor association found that, last year, job creation in 63% of those 146 metro areas exceeded the traditional 1.2 jobs-per-building-permit benchmark. On average, the entire group generated 2.4 jobs per building permit issued. 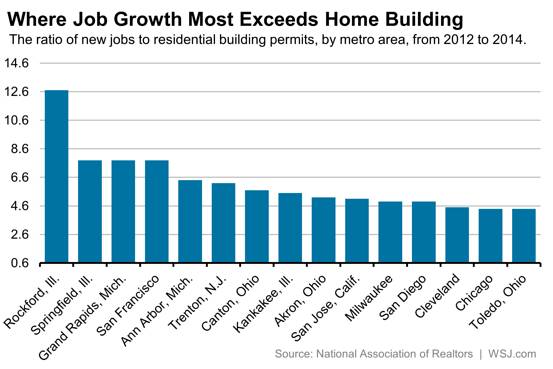 The study found the largest ratios from 2012 to 2014 in a few cities that traditionally have the tightest, most expensive housing markets in the U.S., such as San Francisco at 7.8 new jobs for every residential construction permit granted, San Jose at 5.1 and San Diego at 4.9. However, there also are several cities that likely can attribute their low level of home construction to vacancies in their existing housing stock, such as Rockford, Ill., at 12.7, Trenton, N.J., at 6.2 and Canton, Ohio, at 5.7.

Such high ratios usually indicate demand for housing outpacing supply growth, which in turn contributes to rising home prices and less-affordable housing overall, the Realtor association’s Mr. Yun said. As evidence of that demand, he pointed to the median number of months that newly built homes spend on the market before they’re sold. In July, that median was just 3.6 months, not much above the all-time low of 2.9 months set in October 2013 and again in October 2014.

Mr. Yun and others have pointed out that selling larger, high-priced homes brings builders better profit margins than building starter homes. Thus, builders have focused mostly on catering to the higher-end market in the recovery while largely ignoring the entry level, they say. “They will follow the profits,” Mr. Yun said. “Right now, there’s a bigger profit on move-up homes.”

That’s true. But it needs more context. In short, a builder needn’t sell as many move-up homes as it would starter homes to reach its targeted return on invested capital. Thus, the builders association and others say, there needs to be robust demand for starter homes in order for builders to justify developing starter-home communities. Many say that such demand hasn’t yet materialized.

“If demand was there, there likely would be more supply,” said Mike Dahl, an analyst who tracks home builders for Credit Suisse AG.

PulteGroup Inc., a builder in 29 states, has seen nascent demand for starter homes, but not enough. “As you start to see more consistent sales paces, that’s when builders will get more active in that entry level space,” Pulte spokesman Jim Zeumer said.

For his part, Mr. Crowe of the builders association noted that the Realtor group’s research overlooks a couple of points. First, he said, some people in newly created jobs might move into previously vacant, existing housing, such as foreclosed homes. Second, wage growth has lagged job creation of late, meaning that not all workers in new jobs can afford their own home.

“Just because you have a job doesn’t necessarily mean you can afford to live on your own,” Mr. Crowe said. “More adult children are living with their parents that ever before. They may have a job, but it isn’t sufficient for them to move out.”

Finally, the Realtors study focuses on 2014, when new-home sales stalled. They’ve regained momentum so far this year, posting a 21.2% gain from the same period of last year.

How a Two-Tier Economy Is Reshaping the U.S. Marketplace