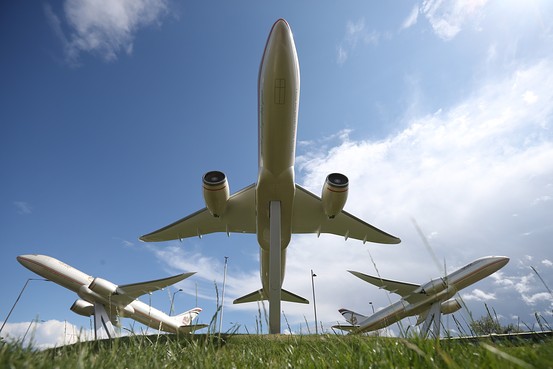 Could new orders for durable goods be up by 20% or more in July? Some economists think so, all because of one company.

The Commerce Department is slated to report on the durable goods sector Tuesday. New orders for goods lasting three years or more are expected to be up 7.5% last month, according to the median forecast of economists surveyed by The Wall Street Journal. That’s better than the 1.7% increase posted in June, but 11 of the forecasters expect a double-digit gain and six are betting on an orders surge of 20% or more.

The reason is the record number of orders booked by Boeing Co. The aircraft maker publishes demand for its products on its website, and in July it took orders for 324 new planes, mainly its new 777X plane.

“Now, the folks at [Commerce] could somehow aggressively seasonally adjust this reality away,” Mr. Porcelli writes in a research note. “But this would be surprising, given July is typically a down month for [unadjusted] headline orders.”

The result, he forecasts, could be a “blockbuster” increase of 35% in headline new orders. Other economic shops expecting a huge gain in July new orders include IHS Global (38.1%), Citigroup (+30%), and Goldman Sachs (+23.6%).

Outside of aircraft, however, the new orders data are flying at a much lower altitude. New demand excluding transportation equipment is forecast to edge up just 0.4% in July, after a 1.9% advance in June.

Because of the time it takes for Boeing to produce and deliver an aircraft, the jump in orders is not expected to provide an immediate lift to economic activity. In addition, no matter how large the July gain in durable goods, Citigroup economists warn, “On the flip side, this order will cause a similar-sized decline in August.”