Why This Teen Can’t Stop Eating: Life With Prader-Willi Syndrome

Every waking minute of Hannah Wilkinson’s day is filled with intense hunger. 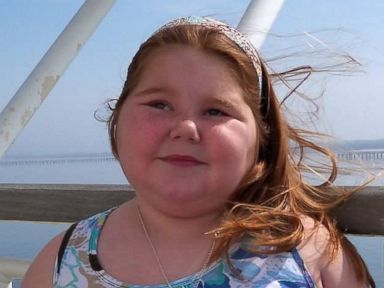 When Your Daughter Can’t Stop Eating: Raising a Child with Prader-Willi Syndrome

Texas Girl, 12, Who Is Always Hungry, to Get Gastric Bypass

The 14-year-old’s hunger rules her family’s lives. At their home in Phoenix, Arizona, the kitchen is on full lockdown, with a padlock on the refrigerator, no food in the cabinets, and a constantly locked pantry door.

“When we got a dog, I did not even think about dog food. It didn’t even cross my mind that I had to lock up the dog food,” Tonya Wilkinson said. “I have caught her … eating dog food.”

But the condition mostly creates an insatiable appetite, which has pushed Hannah Wilkinson to almost 350 pounds, her heaviest weight ever.

“The hypothalamus, the part of our brain that controls our hunger, with children or adults with Prader-Willi Syndrome, is pretty much shut off, so they don’t know that they’re not hungry,” Tonya Wilkinson said.

For Hannah Wilkinson’s mom, this means constant vigilance. Tonya Wilkinson recalled a time when she was cleaning the kitchen after dinner and her daughter shoved a huge piece of pot roast into her mouth.

“I turned around, and she was choking. They do not chew. They swallow. And a lot of deaths, unfortunately, with Prader-Willi, you know, is the choking,” said Tonya Wilkinson.

After a surgery to remove a rare brain tumor in 2011, Shapiro developed hypothalamic obesity when she was 9 years old, unlike Hannah Wilkinson, who was born with the syndrome.

“As soon as she woke up from surgery, she immediately started asking for food,” Ian Shapiro, Alexis Shapiro’s father told “20/20.”

Even before she was released from the hospital, Alexis Shapiro gained eight pounds. Once they got home, things only got worse.

It turned out Alexis Shapiro’s surgery had altered the part of her brain that regulates appetite, giving her similar symptoms to Hannah Wilkinson. The 12-year-old topped out at 203 pounds.

Obesity experts, like Dr. Robert Lustig, are looking at cases like Alexis Shapiro’s to better understand weight gain in the rest of the population. They say the key is the hypothalamus, the part of the brain that, when damaged, releases insulin causing an insatiable appetite. Controlling that insulin might be a solution to fighting obesity.

“The same thing occurs in people without brain tumors,” Lustig told “20/20.” “When we get the insulin down, they feel better. They lose weight, and their lives turn around, so the target is not calories. The target is insulin.”

But Lustig’s work is still in the experimental phase. Desperate to stop Alexis Shapiro’s weight gain right away, her parents turned to surgery.