At the center of the Bank of England’s (BoE) stance on monetary policy there is the issue of pay growth: as long as real wages growth remains low, the central bank signaled it will not advance its plans to raise interest rates in early 2015. The BoE also revised down its wage growth forecast for this year from 2.5% to 1.25%.

But although salaries seem to be stagnant, they might pick up soon enough.

As the unemployment rate keeps falling—the Office for National Statistics (ONS) places it at a six-year low of 6.4%—workers are likely to gain leverage to demand higher salaries, putting pressure on companies’ costs and driving inflation up.

For now, however, ONS data shows average weekly earnings (AWE) between April and June were 0.2% lower than in the same period of 2013, a bigger drop than the BoE was expecting. This explains why unit labor costs in the U.K. have remained flat, keeping inflation—as measured by the consumer price index (CPI)—below the central bank’s 2% target.

But some indicators suggest real wages are set to grow soon: The Recruitment and Employment Confederation (REC) survey shows that pay for new employees has increased significantly in the last year, even rising back to pre-crisis levels. 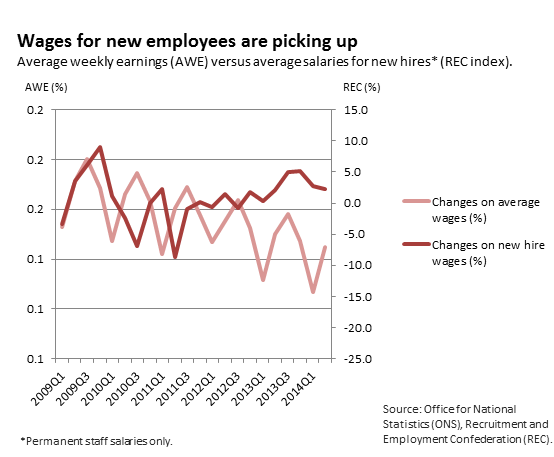 Although not directly comparable to the AWE figures, this data suggests pay growth for new hires is rising more quickly than for the average worker, an indication that wage increases for those already employed may be just around the corner.

“Wages may not reflect recent improvements in labor market conditions,” the August Inflation Report says. “Individuals’ basic wages are typically renegotiated only once a year.”

At the same time, the Bank explains that AWE numbers suffer from several drawbacks: A greater amount of young hires or new employees in sectors that tend to be paid less drag down average earnings even when the rest of the employed are better off as well.

“Changes in the skill and tenure mix of employment may be reducing annual wage growth by around a half percentage point,” the BoE said.

The central bank also pointed out in its August report that the amount of slack in the British economy—those resources not being used because of the crisis—might have been larger than previously thought, but it is also being absorbed at a faster pace than expected. It currently estimates it to be around 1% of U.K. gross domestic product (GDP).

In the British labor market, this slack was in great part generated by companies hoarding more employees than they actually needed instead of firing them, which in turn lowered wages and depressed productivity. With the slack being cut down at a quicker rate, increasing productivity and less willingness on the part of employees to take lower salaries—or work extra hours—will soon put upward pressure on pay.

If indeed the British labor market is not a broken engine as much as one that is taking longer than usual to warm up, it could take a leap forward in the near-term.

“The adjustment we’ve made on the labor side [is] not something that suggests a structural break,” BoE governor Mark Carney said Wednesday addressing journalists. “It’s something that has to do with the timing.”