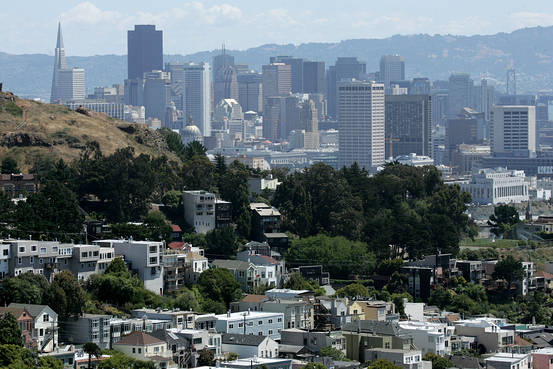 When economists talk about wealth inequality, they often focus on the gap between the rich and the poor. But to understand what’s really happening in the U.S., they ought to talk more often about the gap between the young and the old, and between different races.

A new paper from Federal Reserve economists Jeffrey Thompson and Gustavo Suarez provides a detailed look at patterns of wealth in America. Anyone who’s thought much about wealth in the U.S. probably has realized that the old are richer than the young and whites are richer than blacks and Hispanics, but the extent of the discrepancies uncovered by Mr. Thompson and Mr. Suarez’s research could be startling.

First, consider this anxiety-inducing chart that shows the average net worth of people at every age. 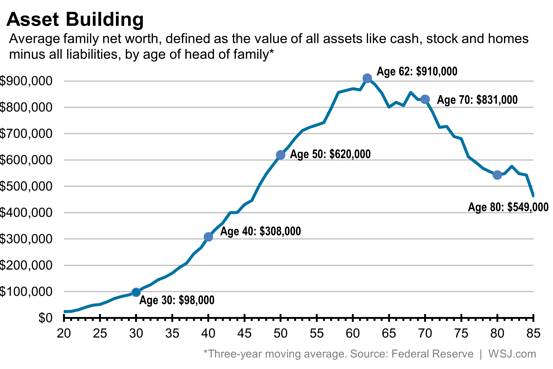 On average, wealth climbs with age. The average 20-something doesn’t have much in terms of assets. The average 62-year-old is nearly a millionaire. These are averages, and so they are skewed by the very rich, but the underlying point remains: For the most part, people don’t start out rich, they become that way over time.

The average American has a distinct debt cycle based on their age, too. 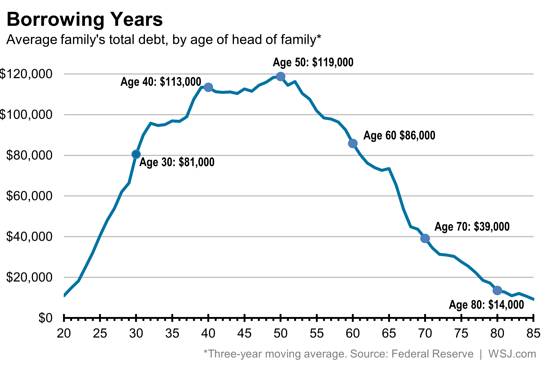 People accumulate debt rapidly in their 20s and 30s. But debt peaks at age 50, and declines, mostly as people pay off their mortgages.

But if you instantly suspected that many people don’t follow this pattern, you’re right. Wealth accumulation in the U.S. is driven, for the most part, by a handful of people. 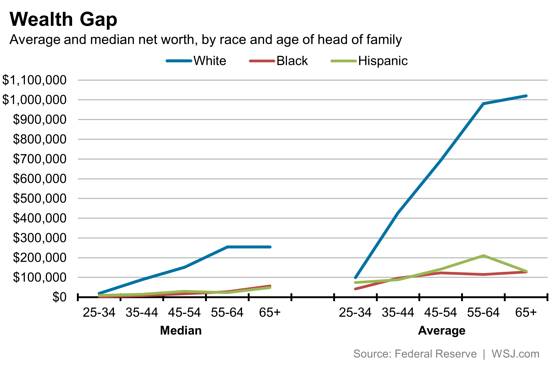 The median white person and the average black or Hispanic person, are not nearly so wealthy. Earlier this year, economists at the St. Louis Federal Reserve parsed the population along lines of race, age and education. They found that this wealth accumulation process primarily works for white and Asian, middle-aged or older families, with a college education or higher. That’s just under a quarter of U.S. families, but they own over two-thirds of the U.S. economy’s wealth.

“Demography may not be destiny, but it is powerful in predicting family wealth,” wrote researchers Ray Boshara, William Emmons and Bryan Noeth. (The Fed’s Survey of Consumer Finances, on which all this data is based, uses families as its unit of measurement. Education levels, age and race are all those of the head of the family. There are some obvious drawbacks to this approach, but, then again, this is already some of the most complicated and difficult-to-compile data in economics. How much more complicated would you want to make it?) 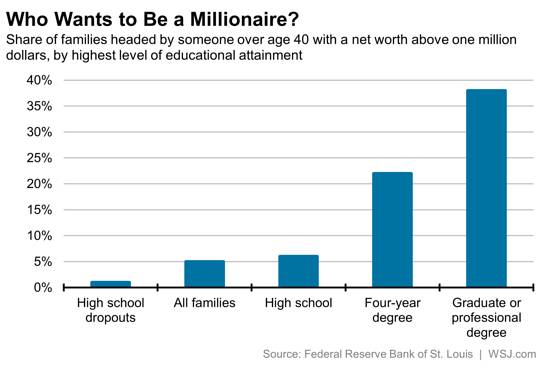 The St. Louis Fed study contained some striking data on how much difference there is for people of different education levels. By the age of 40 and over, about 5% of families have become millionaires. But among families with college degrees, that’s about 22%–more than one in five–and among those with a graduate or professional degrees, that’s about 38%. Among high school dropouts, less than 1% are millionaires. 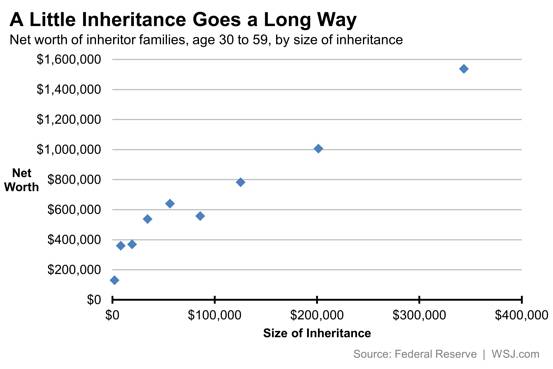 Of course, there is one more way that people get rich: inheritance. Even families who receive fairly modest inheritances end up quite a bit wealthier. For this chart, the Fed’s economists divided inheritances into 10 buckets. The bottom 10% of inheritors received an inheritance averaging only about $2,000. Families receiving this much inheritance aren’t that wealthy.

This data raises tons of uncomfortable questions with no easy answers. One question that Mr. Thompson and Mr. Suarez wanted to answer was why the racial wealth gaps in the U.S. are so large. This might sound straightforward–maybe the wealthy simply earned and inherited more money. But that’s not what the data shows. Even after accounting for different incomes, inheritances, education and other factors, these gaps between families of different races remain, especially among the wealthy. It turns out that documenting the gaps is only the first step.