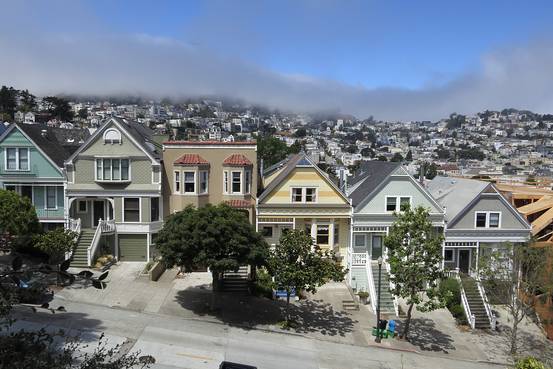 San Francisco is among the cities that makes housing affordability worse through zoning and other land-use restrictions, Jason Furman said.
SEAN GALLUP/GETTY IMAGES

White House economic advisers have produced a steady diet of white papers this year to spotlight the puzzle of sluggish productivity, which economists want a better handle on because it helps explain why incomes for the broad middle class aren’t rising. Their latest target: land-use restrictions.

Housing is growing less affordable because there’s more demand for rental and, increasingly, owner-occupied housing, but little new supply. This hasn’t been a problem until recently—there’s been a considerable backlog of foreclosures and other vacant homes following last decade’s property bust. Throughout the housing slump, policy makers have focused on boosting demand by keeping mortgage rates low and expanding access to credit.

Now, there’s growing attention on what’s happening on the supply side. Some cities face supply constraints beyond their control. Coastal cities often see much pricier housing—and considerable price volatility—because there aren’t too many places left to build.

But other cities make things worse with zoning and other land-use restrictions that discourage production, said Jason Furman, chairman of the White House Council of Economic Advisers, in a speech Friday at a housing conference co-hosted by CoreLogic, a data company, and the Urban Institute, a think tank.

“Artificial constraints” on housing supply hinders mobility, and increasing mobility “is going to be an important part of the solution of increasing incomes and increasing incomes across generations,” Mr. Furman said. Zoning rules, of course, aren’t distributed randomly across the country, which means they’re “actually correlated with those places that have higher inequality,” he said. “If you’re not pricing people out of the market, you’re able to attract more people and increase employment more,” Mr. Furman said. One reason for the breakdown in convergence, said Mr. Furman, is that only high-income workers can afford to relocate to those high-productivity cities that have tighter land-use regulations.

Of course, there are limits to what federal policy makers can do on an issue that’s largely handled by states and localities, a point readily acknowledged by Mr. Furman. In that sense, the latest policy discussion reflects an attempt to nudge cities and states to be more thoughtful in designing restrictions, just as an earlier push by White House economists this year has spotlighted the hazards of occupational licensing in hindering mobility.

“It’s something the president is personally concerned about,” he said.

Mobility Is More Important Than Ever, and Here’s Who’s Missing Out