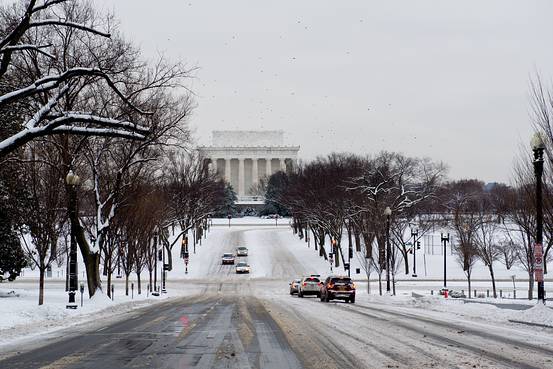 Commuters drive near the Lincoln Memorial in February 2015 after an overnight snowstorm in Washington, D.C., that closed schools and the federal government. The area’s under a blizzard watch from Friday afternoon through late Saturday night.
KAREN BLEIER/AFP/GETTY IMAGES

Will a storm threatening to drop a foot or more of snow on Washington, Philadelphia and other East Coast cities put a winter chill on the U.S. economy for a third straight year? It’s unlikely.

Unseasonably cold winters the last two years caused the U.S. economy to get off to a frosty start in 2014 and 2015. The economy contracted at a 0.9% seasonally adjusted annual pace during the first three months of 2014 and limped along at 0.6% growth to begin 2015. Both readings were among the weakest quarterly performances of what’s been a mostly lackluster recovery.

But an emerging snow threat this week is unlikely to present a serious headwind to the economy this year. (Not to say that suffering financial markets, China’s downward spiral, and a free-fall in oil prices won’t.)

For one, the timing of the storm alone, expected to hit the Washington area Friday evening into Saturday, will limit the impact.

“Though the storm will disrupt millions of lives, the timing is good from an economic perspective,” Moody’s Analytics economist Ryan Sweet said Wednesday. “Its greatest impact will likely occur over the weekend, minimizing the amount of lost output.”

The region expected to be affected by the storm produces about $16 billion in a daily economic output. But since many businesses and the federal government are, for the most part, already closed on the weekends, the storm shouldn’t result in a dramatic increase in lost wages or consumption tied to workers’ daily routines.

What’s more, on the East Coast, this winter has been warmer than typical and relatively storm-free.

A blast of winter this week might just be a return to normal conditions.