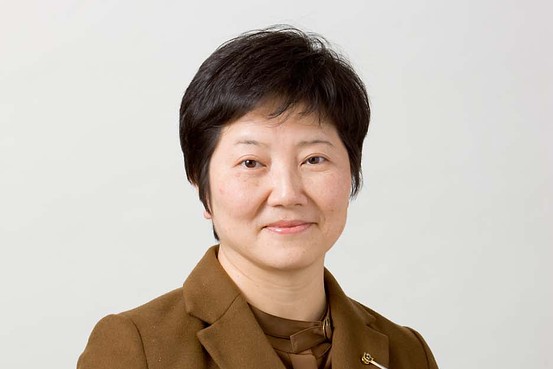 As part of the Japanese government’s growth strategy unveiled Tuesday, Prime Minister Shinzo Abe pledged to create a more flexible working environment for women and promote them in leadership roles.

In the male-dominated world of Japanese finance, it’s still rare for women to reach the level of executive director, though that’s slowly changing.

This year, a number of top Japanese financial institutions promoted women to senior management positions. Those moves included Nomura Holdings Inc.’s appointment of a female president at its trust bank unit, making her the first woman to lead a Japanese bank. Daiwa Securities Group Inc. for the first time promoted a woman to the rank of executive director. Even Japan’s conservative megabanks are beginning to appoint women to executive slots.

Many women now in executive roles joined their companies after 1986, when Japan’s Equal Employment Opportunity Law secured equal treatment for women at work — at least on paper.

She talked about how the role of working women in Japan has changed over the past 30 years. The following are edited excerpts of the conversation.

Q:  How do you evaluate the Abe administration’s growth strategy as far as promoting women’s roles in society? Do you really think it will be effective?

A: I can appreciate their efforts in the sense that it will take an aggressive approach to make a real change. How this should be done and how it will be accepted really depends on each company. Most companies have started to feel they have to do something, and it’s good the government has made them feel that way. But we need further discussions on why we’re doing this. We also shouldn’t consider this as an issue for women only: The problem will never be solved if men don’t try to deal with it too.

Q: Compared to the situation 30 years ago, have you seen a change in the working environment for women?

A: Definitely. When I was job-searching as a new graduate, I wasn’t particularly looking to go into the financial sector since there weren’t many opportunities [for women] at that time. When I joined this company none of the women there would say, “I want to be a branch manager in the future. “ But now it’s common for them to say that.

Q: Have you ever thought about leaving the company?

A: I’ve had no reason to leave the company, thanks to good bosses and colleagues. Daiwa has been supportive in terms of making the working environment better. Our company continues to make efforts to improve the system; for example, the company has promoted women in the middle of maternity leave if they had made sufficient achievements beforehand. By doing so, women may feel more comfortable taking maternity leave without feeling it might hinder them from getting promoted.