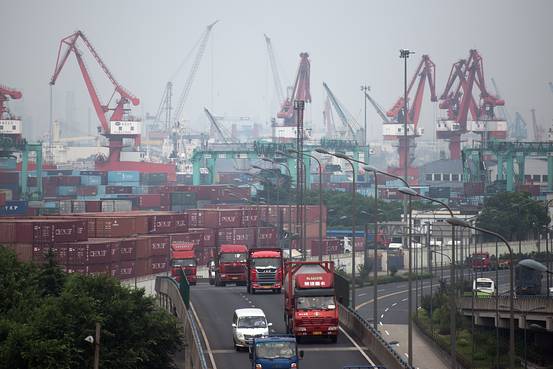 Container trucks leave the Port of Shanghai in August. A recent World Bank study says China would see a tiny increase in trade and a “really negligible” reduction in GDP by 2030 due to its exclusion from the Pacific trade deal.
JOHANNES EISELE/AFP/GETTY IMAGES

So it’s not a surprise that each is espousing totally different views on how a big Pacific trading agreement will affect China, which is not a member of the trade bloc. And as it turns out, each can claim support from experts and economists.

Mr. Obama on Tuesday told members of Congress they should vote for  the Trans-Pacific Partnership trade agreement because it will ensure that Washington’s commercial rules of the road become the norm in the Pacific, rather than China’s. “With TPP, China doesn’t set the rules in that region—we do,” Mr. Obama said in the State of the Union address, revisiting  an argument he aired during his 2015 address, before the TPP was concluded in October.

The 12 nations agreed to a deal that, if implemented, would not only reduce or eliminate tariffs but rein in the advantages of state-owned enterprises and impose binding environmental standards.

Even though Beijing isn’t part of the deal, Obama administration officials say the rules will still challenge China to reform its economy in other ways. The TPP, endorsed by many former military officers, would also boost Washington’s ties with its allies in the region a time when China is flexing its economic and military muscles.

Mr. Trump disagrees. “It’s a deal that was designed for China to come in, as they always do, through the back door and totally take advantage of everyone,” the billionaire GOP candidate said at the fourth GOP presidential debate, in November.

Mr. Trump’s warning echoes criticism from labor unions and Democrats from auto-producing states in the Midwest. They point to the “rules of origin” in the TPP that allow much of the content of cars and other products traded duty-free to come from outside the bloc—including China.

This week Public Citizen, a consumer-watchdog group, poked fun at the Obamas for inviting an American honey producer to attend Tuesday’s speech as a symbol of how the TPP can open up markets like Japan through lower tariffs. In trade circles, “honey laundering” is a symbol of how some imported Chinese products avoid U.S. tariffs by shipping through a third country, such as Malaysia—a TPP member.

Still, some politicians, such as Mr. Paul, seem to think all the talk about China misses the point. “You know, we might want to point out China is not part of this deal,” Mr. Paul said in a pointed response to Mr. Trump during the November debate. The Kentucky senator opposed legislation designed to expedite the TPP because he believes Congress, rather than the Obama administration, should be designing trade policy, whether it’s with China, Japan or the European Union.

Some economists are also saying the talk of China is overblown. A study published by the World Bank last week says China would see a tiny increase in trade and a “really negligible” reduction in its GDP by 2030 due to its exclusion from the bloc.

The State of the Economy in Eight Charts