EH Shepard is best known as the illustrator of the Winnie the Pooh books, but his early career was linked closely to World War I. Herein lies the focus of this sizeable exhibition.

Shepard was enlisted into the artillery and subsequently the intelligence division of the army. During this time he both sketched what he saw and also drew cartoons for Punch magazine, thus presenting the viewer with a diverse array of drawings and paintings.

The Punch cartoons are filled with the absurdist humour associated with the magazine, and this can be very hit and miss. The works generally have a very light tone about them but often lack the cutting bite we’ve seen in other cartoons — such as those in the Napoleonic propaganda exhibition at the British Museum earlier this year.

The show shines in the works that Shepard was not commissioned to produce. Where his creativity is not hemmed in by strict requirements, his talent expresses itself in some fantastic small drawings and paintings. Shells explode in fields, artillery guns fire, refugees flee warzones and a tank crests a hill. These works are created in a quick sketchy style that infuses them with the energy associated with war.

It’s not all battlefield action. Shepard also recreates the jovial scene of soldiers mingling in a soup kitchen as they wait to be served.

This large exhibition gives us a side of EH Shepard we were unaware of. His satirical cartoons ironically often lack punch but his personal drawings of the front line are vivid and steal the show.

EH Shepard: An Illustrator’s War is on at House of Illustration, 2 Granary Square, King’s Cross, N1C 4BH until 24 January. Tickets are £7 for adults, concessions available. The gallery is open Tuesday to Sunday, 10-6.

Nearby is the opportunity to get lose in a multi-coloured mist at Wellcome Collection and a slice of West African culture at The British Library. Art lovers should also see out most talked about art exhibitions for October. 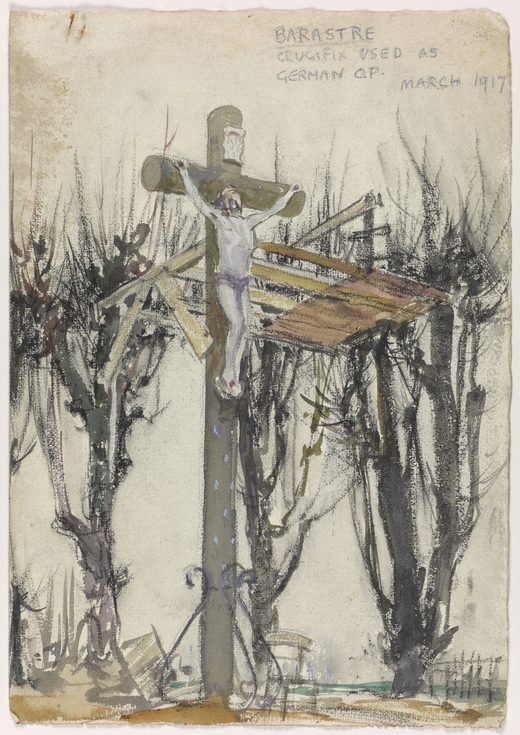 A crucifix being used by Germans as a look out post. © EH Shepard and Imperial War Museums reproduced with permission of The Shepard Trust and Curtis Brown Group Ltd