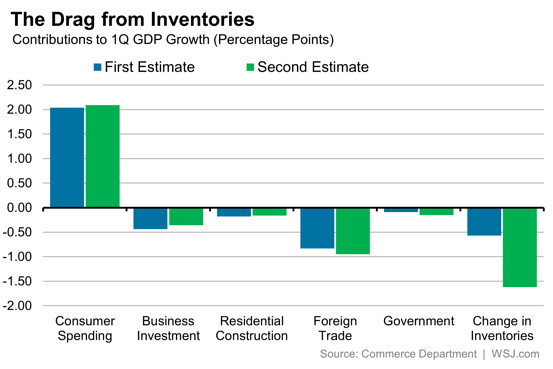 Not to argue with Mae West, but sometimes less of a good thing can be wonderful too.

The unexpectedly large contraction in first-quarter real gross domestic product reflected mainly a smaller addition in inventories. And while a certain amount of inventories is a good thing for businesses to have, the stockpile slowdown is a plus for economic growth going forward.

On Thursday, the Commerce Department released its revisions to real GDP that showed the economy contracted at a 1.0% annual rate last quarter, compared with the 0.1% gain initially estimated. Forecasters had expected negative GDP growth, with the data skewed by the harsh winter, but the revised rate was worse than the 0.6% drop projected.

Revisions to the main demand sectors were minor.

Consumer spending (skewed by estimates for health-care spending because of the Affordable Care Act) was revised slightly up. The declines in business fixed investment and housing were smaller than when Commerce took its first pass at the GDP numbers a months ago. The government and foreign trade sectors performed a bit worse than first thought.

The biggest shift came in inventories.

Businesses added to their inventories over the winter but at a far slower pace than first estimated. (In GDP math, it’s the change in the change of inventories that contributes or subtracts from top-line growth.) As a result of less stockpiling, the inventory sector subtracted 1.62 percentage points from GDP growth, versus the 0.57-point drag in the advance estimate.

Companies entered the second quarter without a large overhang of supplies or merchandise to sell. At the end of March, U.S. businesses held enough inventory to last 1.3 months at the current sales level. That’s a slightly higher ratio than prevailed in 2012 and 2013, but not an alarming number.

Lean inventories mean companies will have to order new goods and supplies to meet any increase in demand.

Early signs of increased ordering can be found in April reports from the durable goods sector and the Institute for Supply Management’s factory survey. May manufacturing surveys done by Federal Reserve regional banks also show orders are holding up this month.

Consequently, instead of a back-up in inventories, goods-producers have a back-up in demand. Those unfilled orders will drive production over the next few months. That’s why second-quarter GDP growth is shaping up to be far, far better than its first-quarter counterpart.