With Emerging Markets Back in Favor, Money Flows to the Philippines – Real Time Economics 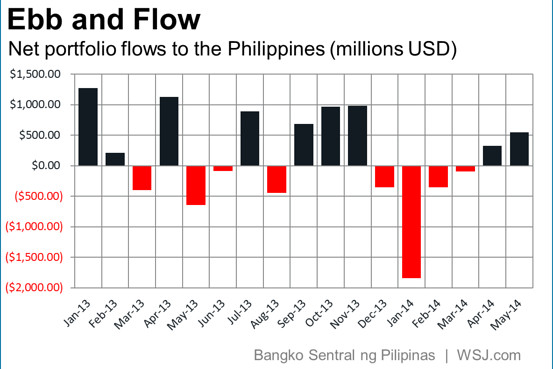 Emerging-market assets have come back into favor after several sharp selloffs over the past year — one last summer in anticipation of an end to the U.S. Federal Reserve’s bond-buying program, another early in 2014 on concerns of political or financial instability in some key countries.

Despite ranking as one of Asia’s hottest economies and stock markets last year, the Philippines hasn’t been immune to investors’ shifting moods. As the chart above shows, portfolio flows to the Philippines have fluctuated from month to month.

Lately the Philippines has come back into favor, registering net inflows in April and May as money floods back to the developing world. In May, portfolio flows into emerging markets hit their highest level since September 2012, at nearly $45 billion, according to the International Institute of Finance.

In Manila, most of that money has gone into stocks. As of this week, the PSE Composite Index is up more than 5% since the end of March, and 15% year-to-date — even though the country’s economy has come off last year’s torrid pace. On the year, however, the Philippines has still seen a net outflow of $1.42 billion, according to the central bank.