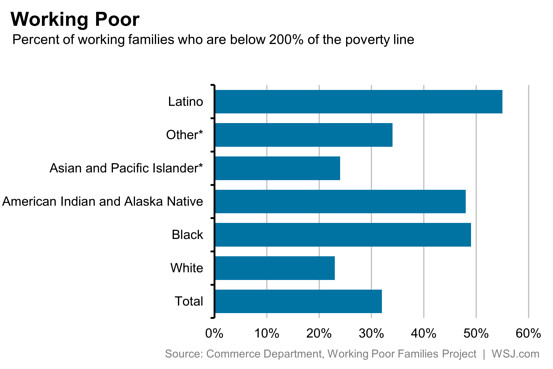 Among America’s working poor, a significant divide is growing between white families and most minority groups.

Working minority families are twice as likely to be low-income—meaning their total income fell below 200% of the poverty level—as white working families, according to a new report from the Working Poor Families Project analyzing U.S. Census data. And the gap has only increased since the start of the last recession, the study’s authors said.

“This is a moral as well as economic issue that’s defining the fairness of our society,” said Brandon Roberts, one of the study’s authors. “The inequality between hard-working families in America is very real and must be addressed and our state leaders have the power to do so.”

A family is defined as working if all family members 15 years and older worked a combined 39 weeks or more in the prior 12 months, or if the family met those conditions and had one unemployed parent looking for work in the prior four weeks.

The report also found that more than a third of African-American and Latino working families are in the lowest income bracket–which tops out at around $32,000–compared with just 13% of whites and Asian Americans. The disparity is likely due to the fact that racial and ethnic minorities are more likely to be working in low-paying jobs, such as retail sales, food preparation, health care and housekeeping services, the report said.